The National Asian Pacific American Women’s Forum (NAPAWF) started a new series entitled “Conversation On Race & Gender” that covers different AAPI topics, from the AAPI Reproductive Justice Agenda to Asian American Women Writers. On May 21, 2021, NAPAWF presented a panel conversation on Asian American Women in Government. The panel speakers included four AAPI women participating and serving in different positions and levels of government across the US: 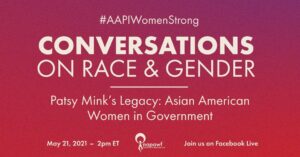 When asked about why they decided to run for office, all the panel speakers mentioned that a part of their motivation came from wanting to help create a space for AAPI women like themselves to speak up and have their voices heard. Grace Meng said that after she realized that there were no Asian American women serving at the Congressional level from New York State or from the East Coast in general, she decided that she wanted to take the first step and run for office herself. Khem Khoeun mentioned that her children’s reaction after the 2016 presidential election helped her make the decision to run, as her daughter was deeply affected by the election result. Khem wanted to set an example for her children and let them see that people like them have a voice in the community and in government. Sima Ladjevardian spoke about her upbringing as the daughter of immigrants from Iran and saw the need to represent her community in the US government and help connect different communities together. Betty Yee, having over 35 years of experience in the public service, shared her experiences from helping her family manage their laundry shop in to now helping to run the economy of the State of California. She said that one of the proudest moments during her career was being able to help more AAPI women enter the workforce at the US government and bring more divorcee voices to the table.

In the end, each speaker was asked to give a piece of advice to  Asian American women thinking about running for office. Khem Khoeun said that it is very important to believe that all AAPI women belong at the table, and it is their responsibility to step up and advocate for the community when no one is there to represent the community’s voices. Sima Ladjevardian encouraged young AAPI women to not be afraid and just do it: “it is important that your voices are heard and you cannot be a silent participant of the world around you anymore, we cannot be bystanders and we just have to go ahead and do it.” Grace Meng added the importance of being authentic. She mentioned that in 2020 she spent a lot of time worrying about whether what she says, what she does, and what she looks like would appear “American” enough, but in the end when she tells her story people would feel the authenticity and relate to her personal stories. Betty Yee concluded the discussion by speaking about empowerment through telling your story, “There’s space for you, your voice is needed. I think part of the challenge but also the reward of campaigning is I can’t think of any other time in my life where I’ve taken stock of what my life has been about, and it’s rich. We all came from very, very rich backgrounds […] There’s something very powerful about our own stories because they are uniquely ours and nobody can take that away from us.”

Link of the event video: https://www.youtube.com/watch?v=ad70JGonkjM&t=2753s