This upcoming October, the 1882 Foundation will be holding its inaugural Chinese American Women in History Conference. During this conference, with the inclusion and collaboration of different organizations,  community actors, and academics, we hope to fill the gap of pre-1965 Chinese American history, with an emphasis on the War Brides Act. With that, we would like to introduce Jenny Chan, co-founder of Pacific Atrocities Education, a non-profit organization based in San Francisco dedicated to raising public awareness of wartime atrocities committed in the Asia Pacific. Learn more about PAE on their website, http://www.pacificatrocities.org/ as well as from Jenny herself at our Chinese American Women in History Conference, October 24-26. 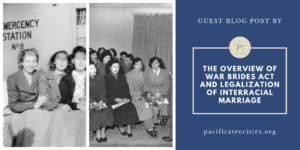 World War 2 contributed significantly to our immigration history. The most commonly told story is of Einstein escaping militaristic Germany, but the immigration stories of the Asian Americans are often forgotten. As the United States and China were allies during WW2, the Chinese Exclusion Act was revoked by the Magnuson Act. However, the Magnuson Act was mostly a PR stunt as the 1924 Immigrant Act, known as the Johnson-Reed Act, still set a quota for the number of Chinese immigrants that were allowed to be in the United States. Set by Republican Senator from Vermont, William P. Dillingham, the quota was set to 3% of the total population of the foreign-born of each nationality in the U.S. In this context of the 1910 census, this would only allot 350,000 visas a year worldwide. Of course, this quota did not apply to Europan foreign nationals wishing to immigrate to the U.S. In addition, the Johnson-Reed Act also established a literacy test for Asian immigrants.

Then at the end of the war, in order to satisfy the servicemen who married abroad, the 1945 War Brides Act was passed. This Act allowed WW2 soldiers who married women while stationed abroad to bring their wives and children to the United States. The act also extended to Nisei soldiers who served in the war. This was a major breakthrough, as there had never been such a large number of Asian women immigrating to the United States. In 1952, this number again heightened as more Asian women were allowed to enter the country due to the Immigration Act of 1952, which eliminated the race-based barriers.

This raises another important aspect of immigration; that it has always been imbalanced in terms of gender. Caucasian Americans have often sought out efforts to eliminate opportunities for early Chinese settlers to either immigrate or comfortably live in the United States, fearing that their large numbers would multiply as they begin to establish families. In defiance to this adverse undertone, within 3 years, the War Brides Act allowed more than 300,000 women and children to make their journey and build their home in the U.S. It was estimated that 85% of the War Brides were Asians.

World War 2 had led to much unforeseen progress in the modern world. The War Brides Act and the legalization of interracial marriage are just one of the examples of the progress that WWII brought about.