May 31 marked the first-ever National Day of Solidarity Against AAPI Hate. Thousands gathered in major cities across the country to protest against anti-Asian violence that has swept the nation. A flagship rally was held in Washington, D.C., and featured numerous public figures including singer KHA, who performed her original song, “NO MORE,” as a call for the Asian Pacific American community to unite against racism.

These nationwide rallies were planned for the last day of Asian Pacific American Heritage Month, a time dedicated to celebrating this community’s history and contributions to this country. The month commemorates the first Japanese immigrants to arrive in the United States in May 1843, as well as the completion of the first transcontinental railroad in May 1869, for which Chinese immigrants played a major role. Coincidentally, May 18 also marked what would have been the 66th birthday of Vincent Chin, a Chinese American man murdered by white autoworkers who blamed the Japanese for stealing jobs.

Asians have lived in North America for almost five centuries, but most public schools do not teach their complex histories. So, perhaps unsurprisingly, many Americans perceive them as perpetual foreigners, inherently different and never truly fitting in. Over time, as Asians increasingly settled in the United States, anti-Asian sentiments spiked in waves, culminating in violence that seems all too familiar today. Over the past year and a half, the reporting forum Stop AAPI Hate has recorded more than 6,600 incidents of hate and discrimination, a number that is predicted to rise as the country opens up and restrictions are lifted. 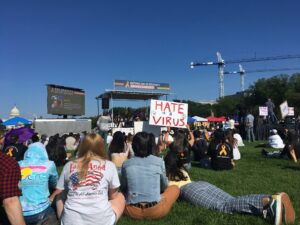 One of the most egregious attacks happened in March, when a shooter opened fire at three Atlanta spas. Eight were killed, including six Asian women. In a press conference afterwards, the sheriff’s office spokesman seemingly dismissed racial motivation as a cause, describing the shooter as having both a “sex addiction” and “a really bad day.” This racial gaslighting demonstrates the legacy of the United States’ 150-year-old history of hypersexualizing Asian women. It also evokes the broader context of obscured racial tension within this country.

The Atlanta shootings sparked plans for the National Day of Solidarity Against AAPI Hate, which was aptly scheduled to conclude Asian Pacific American Heritage Month. Perhaps the month’s activism has encouraged Americans to engage with Asian cultures more thoughtfully.  Some suggestions are to dine at Asian-owned restaurants and learn about how anti-immigration laws pressured their growth. Listen to Asian Pacific American music artists and read about the struggles of undocumented immigrants like Tereza Lee, an accomplished pianist who inspired the proposal of the original DREAM Act. Support businesses that employ Asian workers and reflect on the lives lost in the recent Atlanta and Indianapolis shootings.

Asian cultures are not here to be blindly consumed without respecting Asian people. This is our home, and as KHA sang during the rally, “We’re gonna rise up and stand our ground.”

This piece originally appeared in Maryland Matters. The writer is an undergraduate student at the University of Maryland, College Park.

GUEST BLOG POST: “The Overview of the War Brides Act and Legalization of Interracial Marriage” by Jenny Chan from Pacific Atrocities Education

Blessings and Curses of Assimilation