Through Chinatown’s Eyes: A Series of Videos Starting with April 1968

The first in a series of short documentaries, April 1968, examines the impact of the civil disturbances and violence in DC on Chinatown after the assassination of Dr. Martin Luther King in April 1968. The story, from the perspective of people recalling events as school children and young adults in Chinatown, explores ideas about ethnic identity and race relationships. It tells how the street violence affected the growth of the neighborhood and its commercial development.

The film was produced by Penny Lee with Lisa Mao. It is a product of the 1882 Foundations’ DC Chinatown Oral History Project. The project seeks to record the oral histories of people who have a stake in preserving the history and heritage of DC Chinatown.

In collecting the oral histories (and images related to them), project directors wanted to link them by way of topics or themes or issues –each as an episode in the larger Chinese American narrative.  Each episode becomes a complete story in its own, but together they tell the history of DC Chinatown from its beginnings to today even though episodes may overlap chronologically. This film series is called “Through Chinatown’s Eyes.”

A grant from the DC Humanities Council determined the first episode. Under the “Who’s a Washingtonian Grant,” the 1882 Foundation leaders decided to group together memories and stories that dealt with the 1968 street violence and how ethnic neighborhoods interacted or related to one another.

The events of April 19 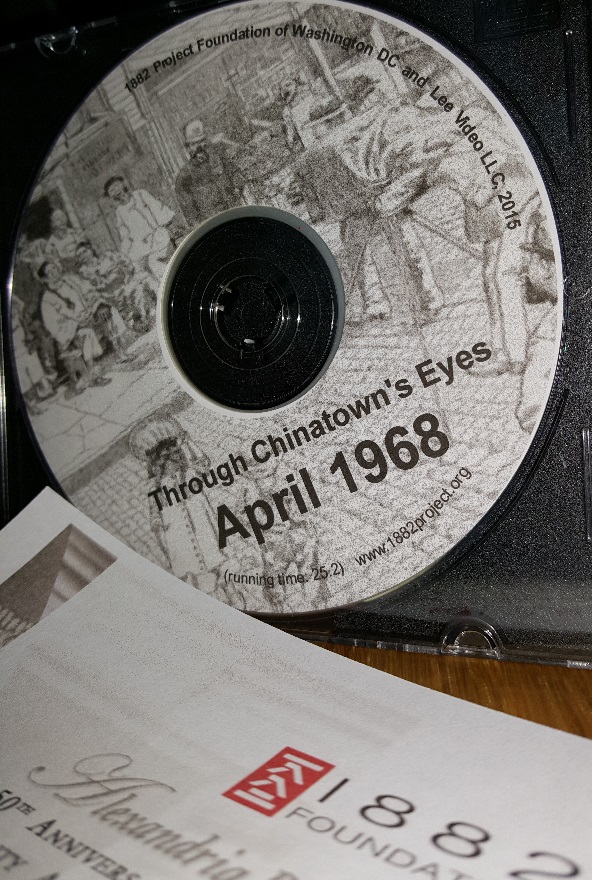 68 were pivotal for Chinatown, as they were for the U Street neighborhood where they started and to the rest of urban DC.   As such, April 1968 is a good episode to start the film series.  It delineates a watershed between two time periods that helps to categorize our stories and conceptualize future episodes. The first period will collect stories generally about traditional perspectives and
legacy Chinatown affiliations. The second period holds together stories that relate prominently to American acculturation and the fading of old organizations and established livelihoods for a community moving decidedly to the suburbs, even as Chinatown still remains meaningful in a cultural sense.

What that meaning is, as an indicator of the future of Chinatown, becomes a key question to explore. This question and the effort to articulate answers to it becomes another purpose for gathering and preserving our stories.

Future episodes of the Through Chinatown’s Eyes series will go one direction to uncover older history and traditions. These include episodes about family associations, reasons to settle in DC, original function of Chinatown, daily life and society including the direct consequences of the Chinese exclusion laws and the immediate impact of WWII. Episodes can go the other direction to examine topics about activities related to American civil rights and participation in mainstream political actions, the evolution of Chinatown businesses, changing youth activities and the gentrification of DC Chinatown. Chronology is respected but not as important as completing the story and understanding social and cultural contexts that may overlap episodes.

We have a list of potential episodes.  We welcome suggestions for others.  Each episode will run no longer than 25 minutes. Each will have a study guide similar to the one developed for April 1968. The study guide is important because the mission of 1882 Foundation and this film series is not just to collect and re-tell entertaining stories. Fundamentally, it is to educate the public about the history of Chinese in America and its continuing and future significance to all Americans.

In addition to funding provided by the DC Humanities Council, April 1968 received financial backing from the Chinese American Citizens Alliance, the Sino-American Cultural Society and OCA. The ability to produce the video, however, came from the talents and skills of the team led by Penny Lee that gave tremendous amounts of pro bono time and uncompensated in-kind donations. The 1882 Foundation is a non-profit 501(c)3 organization.