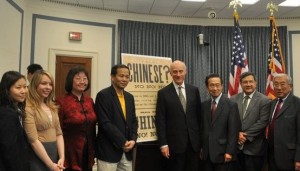 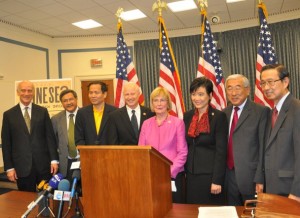 WASHINGTON, D.C.–U.S. Reps. Judy Chu (D-CA), Judy Biggert (R-IL), and Mike Coffman (R-CO), along with Senators Feinstein (D-CA) and Brown (R-MA), today announced the introduction of a resolution calling on Congress to formally acknowledge and express regret for the passage of a series of laws during the turn of the 20th Century that violated the fundamental civil rights of Chinese-American settlers.

“A century ago, the Chinese came here in search of a better life. But they faced harsh conditions, particularly in the halls of Congress. Congress passed numero 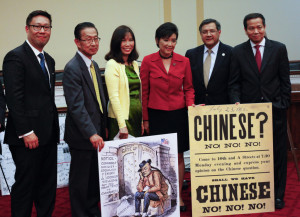 us discriminatory exclusion laws that barred the Chinese from accessing basic rights given to other immigrants. These laws engendered hatred, bigotry and prejudice in the minds of Americans towards Chinese. Many were brutally murdered, and even more were abused, harassed and detained,” said Chu, lead House co-sponsor. “It is long overdue that Congress officially acknowledges these ugly laws, and expresses the sincere regret that Chinese Americans deserve. The last generation of settlers impacted by this legislation are leaving us, giving Congress a short window to make amends to those who were directly affected.  As the first Chinese American Congresswoman, I am proud to say that we will today introduce a resolution on the House Floor that does just that.”