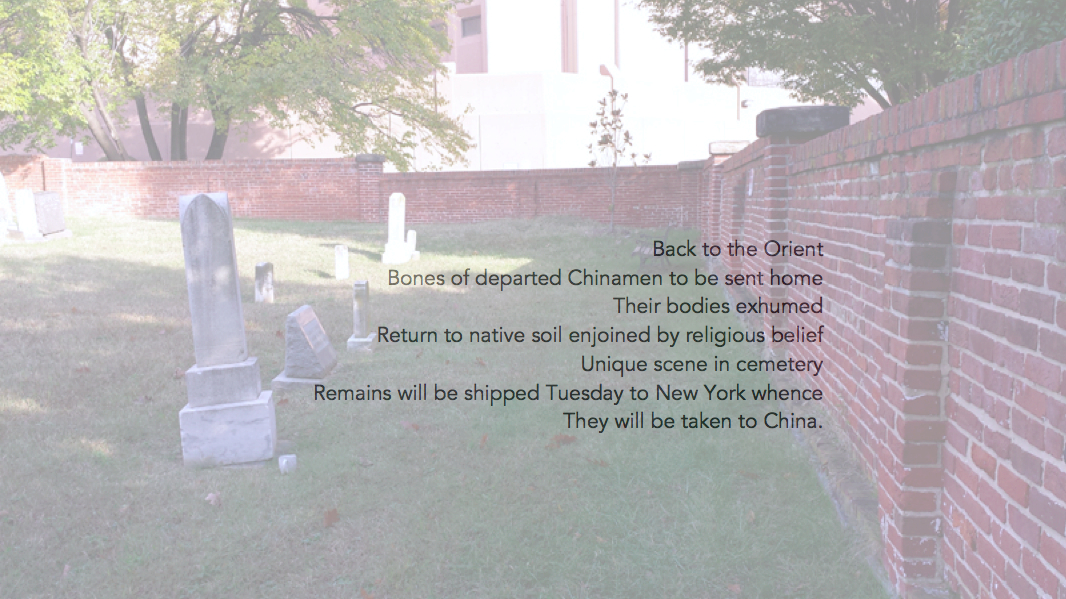 As the Winter sun crept over the hills back of Anacostia early yesterday morning,casting a pale light over a sleeping city and dispelling the chill mists of the Eastern branch, its rays fell upon its grim and cheerless a sight as ever greeted a dawn. Huddled in the far eastern corner of Congressional cemetery, against the board fence that meets the river bank, was a small band of Chinese, bracing themselves against the bitter west Wind with a determination demanded by a grisly task. In front of them bent half a dozen gravediggers engaged in disinterring the remains of twenty-two Celestìals, the last of whom had been buried at least five years, for shipment to their native soil-for a Chinese may not lie forever under foreign soil if he would enjoy perpetual happiness in paradise. Around them, silent and ghostly, arise the headstones that mark the resting places of dozens of other Chinese. —The Evening Star, February 1, 1909, p. 9

Since 1807, the Historic Congressional Cemetery in Washington, D.C. has been resting place for military generals, public officials, Indian Chiefs and ordinary citizens. Little known, however, is that Chinese migrants were also interred there between 1896 and 1938, in three sections set aside for Chinese burials. As was the custom at that time, remains were later disinterred and shipped to China for reburial in ancestral plots.  Nothing remains at the burial sites –neither stones nor physical markers–to indicate Chinese were there. Their presence and work have gradually been forgotten.  However, cemetery office records and news accounts of funeral rituals remain and they have helped to locate the area of the cemetery, Range 99, where most of the burials took place.  Similar to efforts to preserve Chinese cemeteries throughout the U.S., members of the Historic Congressional Cemetery and the 1882 Foundation have sought to mark these rediscovered locations.  But, unique to Range 99, a memorial there places Chinese people in the panorama of American history –among its generals and politicians, band leaders and ordinary citizens.

The 1882 Foundation with the Chinese American Citizens Alliance and the Chinese Consolidated Benevolent Association and the Congressional Cemetery placed two benches at the site.  A small plaque further identifies the significance of the place.  We hope to fill the ground surrounding the benches and the plaque with bricks engraved with names of villages in China, hopefully having bricks that were formed by the soil there, from where the Chinese came to work in the United States and where they sought to return after laboring in the United States. The benches, the plaque and the engraved bricks will form an understated memorial patio.  Visitors can briefly rest there.  Under the cooling shade of an snarled oak tree and in view of the historic cemetery, they can remember the Chinese place in America and understand the connections between two countries, two peoples throughout American history.

To learn more about how you can support the project, please contact us!

The careful footsteps around Range 99 at Congressional Cemetery belonged to many non-dog walkers today. On a summer-like spring morning, a plaque was laid at the site where nearly 100 Chinese-Americans were interred between 1896 and 1938. Although these bodies have long been disinterred and the bones sent back to requisite Chinese villages, the site, Range 99 is now formally marked as a spot where many Chinese American Washingtonians of the Exclusionary Period were buried.

As a catalyst for this memorialization, Mr. Ted Gong, National Vice President for the Chinese American Citizens Alliance (CACA) oversaw all the research, details and coordination necessary to get to this day. With the support of numerous organizations including: Congressional Cemetery, CACA, Chinese Consolidated Benevolent Association (CCBA), Lee Family Association, Moy Family Association and others, visitors to Congressional Cemetery will now enjoy a documented place in this historic cemetery where Chinese-Americans found a resting place – albeit temporary. Along with several fellow researchers, cemetery staff, Chinese family association members and a few dog-walkers, the commemorative plaque was laid on a bed of red bricks. Additional bricks from those Chinese villages where those interred here came will be installed, further ensuring that the story of early Chinese sojourners who lived, worked and struggled in America and finished their time in Washington, DC will not be forgotten. Amongst the notable gravesites of J. Edgar Hoover, US Senators and Congressman, a Vice President and a Supreme Court Justice the new plaque installed at Range 99 speaks to the remembrance of Chinese living in America a hundred years ago.

Kicking off the plaque laying ceremony, Ted Gong gave remarks about the significance of marking the spot and providing a place in the historic cemetery for visitors to rest and consider the strength of diversity in America. CCBA’s Vice Chair, Tom Fong provided remarks about CCBA’s historical and current role in carrying out the Chinese ritual known as Qing Ming (the annual ritual of sweeping and maintaining tombs). Grounds Manager, Daniel Holcombe followed with a bounty of details about the cemetery, those interred there as well as the tombstones and more. Back at the cemetery gatehouse, Paul Williams, President of the Association for the Preservation of Historic Congressional Cemetery gave a brief cemetery history and Mr. Gong gave a presentation of Chinese burial and memorial rituals.

More information about the cemetery can be found at www.congressionalcemetery.org

Thank you all for coming this morning.  We are here to lay a memorial plaque for people who rested here briefly, but also for the American story they contributed to.  That story is eternal and universal.  It continues from ages passed.  It was the story told when Jews sought a promise land and when Pilgrims came to Massachusetts.  It was the story of new Americans when they expanded beyond the Eastern seaboard westward throughout the continent where they joined our first Americans and Hispanics and others already creating the nation that would become the United States of America.  This included Chinese building the nation eastward from California and Pacific Northwest.

It is very fitting for us to be here to remember the Chinese –to mark the space– in this historical cemetery.  The benches, the plaque, give visitors a spot to rest before moving on (like the people who were buried at Range 99) without leaving as much as a trace of their brief pause at this little corner.  But, during their brief rest, they can contemplate being a part of the entire cemetery, filled with historically important figures –the senators, the generals, the chiefs…  And, the common folks –the band leaders, the madams, the cooks and doctors, laundry men, tailors, laborers—people like you and me—who together (with our all foibles and talents) make up this country of diversity.

I hope our brief time here, in this little corner, reminds us that the strength of this nation is in its diversity –of which the Chinese Americans were and are a part, and which these benches and the plaque help to represent.