This is the first post for DC Talk Story by Roberta L. Chew, a former Foreign Service Officer and San Francisco native.  Let us know what you think.  We welcome your questions or comments. 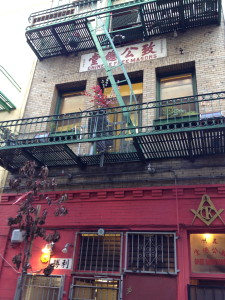 This spring, I made a point of getting out to San Francisco because the Chinese Historical Society of America (CHSA) was hosting several visitors from Cuba for a special program.  I was keen to meet them as I was headed soon to Cuba on an educational tour.

Some of the Chinese Cuban visitors were in San Francisco for a grand conference of associations known as the Chinese Freemasons (they have different names – Min Chih Tang in Cuba, Chee Kung Tong in San Francisco.)  Four out of eight cities with affiliated chapters were represented:  Vancouver, Houston, Havana and San Francisco.  A huge banquet was held at Asia Garden attended by 800 members, relatives and friends, demonstrating the community support they still enjoy.  While little heard of outside of Chinatowns today, these Chinese-American social associations still play important civic and service roles in their communities.

Chinese Freemasons date back to the early years of the Qing (Ch’ing) Dynasty when they formed to work towards the overthrow of their foreign Manchu rulers.  Dr. Sun Yat-sen, founder of the Chinese Republic in 1911, was a Freemason.  In fact, donations from Freemason lodges around the world helped Dr. Sun eventually succeed.  In 1910, the Chinese Cuban Freemasons with their 200 members, managed to raise and donate an astonishing $5000, a huge sum at the time.

Ironically, only four days after CHSA’s event, the FBI entered the premises of the Chee Kung Tong on Spofford Alley in Chinatown and broke into a safe where documents from Dr. Sun Yat-sen’s era were safeguarded.  The FBI arrested CKT leader Raymond “Shrimp Boy” Chow on charges of money laundering and conspiracy to deal stolen property.  His arrest was linked to a corruption investigation of long-time State Senator Leland Yee.  Yee’s arrest the same day shocked and dismayed Chinese in California and throughout the nation.

This incident brought unwelcomed negative attention to S.F. Chinatown, reinforcing and amplifying age-old stereotypes of criminal Chinese activities in America.   It is lamentable that all the daily good deeds, social service, and civic accomplishments of this hard-working community were undermined in a nano-second.

Roberta L. Chew is a UC Berkeley graduate & a 30-year federal employee.  She and her husband, Jay, live in Alexandria, VA.