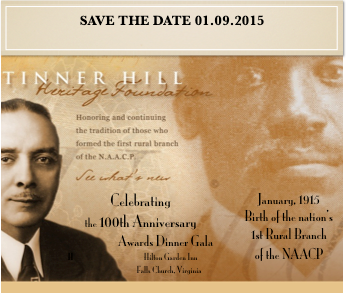 Executive Director Ted Gong recently received a legacy award from the Tinner Hill Heritage Foundation. The Virginia foundation is dedicated to honoring and continuing the tradition of those who formed the first rural branch of the NAACP.   In receiving the award during the foundation’s gala dinner January 9, 2015, Gong gave the following remarks. His remarks bring together the Chinese American and African American stories and tie together pride in heritage, efforts at historical preservation and fundamental issues in today’s immigration debate.

I want to thank the Tinner Hill Heritage Foundation for this recognition. In view of the passion and hard work that you all have demonstrated (especially Nikki Graves and Ed Henderson), I don’t feel adequate to the honor. But I do very much appreciate this moment. Too often, in our efforts at historical preservation and programming, we keep to ourselves. Stove-piped within our own communities, we celebrate each rediscovered story, take pride in our unique heritages, and give them voices that are our own. We need to do this – other people should not be allowed to define us by deciding what is important in our history.

But there is that which binds us together as a single community. And, this recognition reminds us of what makes us Chinese Americans, African Americans, Jewish Americans, Irish Americans…. It is a shared belief that all persons are created equal, actualized by legally defined civil rights.

2015 is the fiftieth anniversary Voting Rights Act of 1965. It is also the fiftieth anniversary of the Immigration and Nationality Act of 1965. This Act profoundly impacted the Asian American community because it repudiated the racist assumptions and racist provisions embedded in every immigration act since the first comprehensive immigration reform in 1882. This was the Chinese Exclusion Act that prohibited Chinese from immigrating to the United States and deemed them unfit to become American citizens. Its exclusion provisions were expanded and extended to make all people “aliens ineligible for citizenship” from an “Asiatic Barred Zone” that stretched from modern day Korea through all of India and Pakistan to Turkey. This racism was finally denounced by Congress in 1965 –and that Congressional action was very much because of the Civil Rights Movement of the 1960s.

A danger we face in today’s immigration debates is the creation (and then unquestioned acceptance) of different “categories of people” within our borders, categories with different rights.   Citizens or not?   Green cards, with our without conditions. People who can or cannot get drivers licenses. Right to work, maybe.   Sanctuary city, yes or no? Can I take my child to a public health clinic and expect equal treatment for equal cost…or any treatment at all?   Can I walk to the corner store without being profiled, detained and deported without legal representation? Can the children of these people become Americans?

Sadly, these are not new questions.

The value of projects like the Tinner Hill Heritage project is that they preserve answers on how people dealt with these questions in the past to get us from there to here. Then, it is up to us to see and understand, so that we can move us from here to the more perfect union we have set as our goal.

So, it is with a great deal of honor and humility to be here in a celebration of heritage and history, and recognition of how our communities intersect as participants within a single community of civil rights.