Foraging for Life, Love and The Perfect Meal 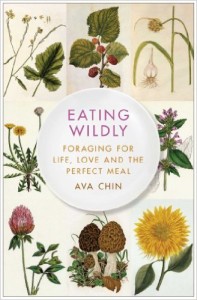 Author and Urban Forager Ava Chin will discuss her recent publication Eating Wildly.  The book is a kit on foraging for food in New York, but it is much more.  An excerpt from the book reveals, it to be a memoir of family and self searching in a space where food intersects with cultures:

…I often tagged along with my grandparents down the aisles of Chinese supermarkets. …Grandpa knew the secrets of the dried, reserved goods and vegetables tucked away into the stores’ dusty corners…. I’m not sure how grandpa knew what he knew–whether his parents had taught him or he’s learned from the cooks at the restaurant–but I just chalked it up to his being more inherently Chinese than I was and that somehow the knowledge came with the territory…I followed my grandfather over to another bin…

A Review of the Event

Our D.C. Talk Story audience was pleased to welcome from New York City, professor and author Ava Chin, who discussed her memoir and the strong influence of her Toisanese family on her upbringing and values.  The two strongest influences on her were her maternal grandparents – her grandfather who taught her the value of wildly grown plants and her maternal grandmother with whom she was closer than her mother.

Since childhood, Ava had an affinity for plucking nearby small plants and berries and popping them into her mouth, savoring their natural goodness.  This somewhat odd preoccupation developed into a career in urban foraging.  She served as the New York Times columnist on the subject for four years after being a journalist with other publications.

And what exactly is urban foraging?  It’s seeking out the wild food in your own backyard or nearby parks and public lands, carefully selecting edible plants, weeds, mushrooms, fungi, berries, etc, to gather, take home and turn into meals.  It’s a commune-with-the-earth, sustainable food movement.  Today, experts take novices on urban foraging tours.

Ava grew up in an apartment building in Queens where there weren’t many weeds or wild foods available.   Her maternal grandfather taught her about the free food sources nearby in the earth and, most importantly, that food is medicine.  “Doong wai” (angelica or wild celery) is good for women after childbirth; mushrooms are immunity builders.  Ava has researched the nutritional value of various mushrooms and plants and has created various recipes for wood sorrel (also called sourgrass), “doong gu” (shitake mushrooms), and “doong wai.”

Ava’s next book will be based on her research into her family history.  Ava’s father and his side of the family had been absent from her entire life.  Why did her father leave them?  She set out on a quest to find her family roots, just as she had doggedly searched for wild roots over the urban landscape.

Her first relative to come to America, Dek Foon, landed in 1885, only a few years after the passage of the Chinese Exclusion Act.  He arrived two weeks after a brutal expulsion of Chinese from Eureka, California.  Dek Foon moved across the country and eventually settled in New York City.  He learned to speak fluent English, became a Christian, married a Caucasian woman and prospered financially.  In an unusual demonstration of cross-cultural support, Dek Foon and a few other well-off, assimilated Chinese men organized a fundraiser for Jewish refugees, displaced by a massacre and atrocities at the hands of the Russians in 1903.  [for more on the remarkable story of Dek Foon and the Chinese American fund raising effort for Jews oppressed in Russia, go to: http://www.chinaheritagequarterly.org/tien-hsia.php?searchterm=027_jews.inc&issue=027]

Ava also shared her thoughts about the process of writing a memoir.  She said a writer has to “own” his/hers personal story, whether their relatives were still alive or not.  She abides by three dictums:  1) does the story need to be told?  2) am I the person to tell it?  3) Is this the right time to tell the story?  If one can honestly answer yes to all three questions, then he/she should write that memoir.

1882 Foundation at GWU’s Mondays at the Museum