The 1882 Foundation hosted a Talk Story on June 21st with Charlotte Brooks, an Asian American history professor at The City University of New York, Baruch College. Ms. Brooks studies race, immigration, and the Chinese diaspora. During the event, she discussed her newest book, American Exodus: Second Generation Chinese Americans in China: 1901-1949, which explores the little-known history of native-born Chinese American citizens who left the United States to settle permanently in China during the first half of the 20th century. 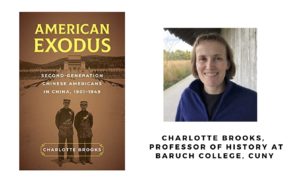 After brief introductions by the 1882 Foundation and Scott Seligman, an award-winning author and historian, Ms. Brooks introduced her book and its context within Chinese American history. From 1882 to 1943, the Chinese Exclusion Act suspended the travel and immigration of almost all Chinese to the United States. It is the only major American federal legislation ever passed to suspend immigration of a specific nationality. During this time, several Chinese Americans traveled from the United States to settle in China; almost half left during the first three decades of the 20th century. This exodus happened during a period of tremendous political change in China – the fall of the Qing dynasty in 1902, warlord dominance from 1916 to the mid-1930s, countrywide reunification by the Chinese Nationalist Party during the 1920s, Japanese invasion and occupation from 1931-1937, and finally, Chinese Communist Party control. In an effort to rebuild China and flee xenophobia, thousands of Chinese Americans migrated, seeking economic opportunity and treatment that they could not attain in the United States. Ms. Brooks explained that this movement raises questions about the values of the American Dream, that all Americans can achieve success through hard work. The United States promotes this concept to frame itself as a country accepting of all backgrounds, and many immigrants eagerly come because of this promise. Ms. Brooks also explained three noteworthy themes associated with the migration: (1) escaping racism in the United States; (2) experiencing China’s uneasy relationships with Western foreign powers; and (3) settling in Shanghai, Hong Kong, and other westernized areas of China. “In these cosmopolitan zones, Chinese Americans’ fluency in English and U.S. passports gave them an unusual degree of mobility, privilege, and opportunity… They enabled them to build lives in China just beyond the reach of the Nationalist regime,” she said.

One case study was Chu Shea Wai, a Chinese American student who moved from New York to Guangzhou, China in 1921 to enroll in university. Four years later, Chinese officials wrongfully arrested him for his brother’s alleged involvement in the assassination of a Chinese Nationalist Party official. As an American citizen, Chu Shea Wai should have had the right to extraterritoriality, an immunity to local laws. However, the U.S. consulate refused to defend him, making his case a precedent for denying American protection to all Chinese American citizens. Chu Shea Wai was “a victim of bad timing combined with official racism,” said Ms. Brooks. The State Department wanted to “demonstrate respect for the emerging Nationalist Party and its citizenship laws while protecting extraterritoriality for the people [considered to be] real Americans, in other words, white Americans.” In 1926, Chu Shea Wai was cleared of all charges and released from jail. Although several of his siblings returned to the United States, he settled in Hong Kong for the rest of his life.

Towards the end of the Talk Story, an audience member asked if Ms. Brooks could foresee another Chinese American exodus. “There are definitely symbols of ugliness that are still so real in our society,” she said after some deliberation. “At the same time… if we say that nothing has changed, we denigrate the struggles of the Chinese Americans who fought to make the country better.” Despite current discrimination, most recently President Trump’s references to the “Kung Flu” and racist attacks amid the pandemic, Ms. Brooks does not anticipate history repeating itself. “Some of the parallels are there, but the countries are both so different that it’s really difficult to draw a direct comparison,” she concluded. “[But] historians hate to be pinned down for prognosticating,” she added, laughing. “We’re much better at talking about the past.”

We thank Ms. Brooks for her work in documenting this historic period of mass migration. American Exodus reveals personal stories of American-born Chinese who traveled to China hoping to achieve success, escape racism, and rebuild the country. Their experiences are integral in Chinese American history.