Havana’s Chinatown:  So Where Are the Chinese People?

An occasional post by the author for D.C. Talk Story and the 1882 Project and Foundation.  See disclaimer below. 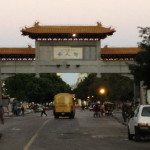 We had scant time to visit Havana’s Chinatown (El Barrio Chino in Spanish) during our 4-day stay in Cuba’s capital.  Compared to D.C.’s multi-hued, gaudy arch, the PRC in 1998 installed a plain, unadorned grey archway for this Caribbean Chinatown.   Why had Havana scored the budget model? 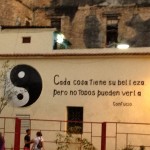 We passed buildings with Chinese characters on them – a couple of Chinese restaurants, a temple, two fraternal associations, a martial arts school.  Painted on some walls were yin-yang symbols and Confucian sayings in both Spanish and Chinese characters. 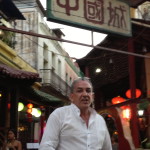 We resisted a Cuban tout trying to lure us into a narrow touristy area with strung up paper Japanese lanterns.  Many Cubans were on the streets, but we did not see any Chinese people. 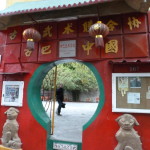 The martial arts academy in particular was exuberantly Chinese in color and motif:  its exterior wall was painted fire engine red; its moon gate entrance bordered in green paint.  The gate’s iron grill was wrought in the traditional “long life” (shou) pattern and also painted red.  As we stood there, a handsome man emerged, locking the gate behind him.  Teen-agers on the street respectfully called out, “Si-fu,” (“Master”) bowing to him as they scurried by.

Roberto Vargas Lee, the owner/instructor of the Cuban Wushu School, is one-quarter Chinese.  He told us his paternal grandfather came to Cuba from South China.   Lee travels to international martial arts competitions with his students.

The first Chinese arrived in the mid-1800s to work in the sugar industry.  They were treated like slaves.  The first to gain their freedom began cultivated small plots of land in Havana.  The Chinese are credited with growing Cuba’s first mangoes, which became a big success.  The second wave of Chinese immigrants came from California (1869-1875), they started restaurants and other businesses.  (Adapted from Eyewitness Travel Cuba).

I had met one other one-quarter Chinese Cuban person – at the March event of the Chinese Historical Society of America (CHSA) in San Francisco.  Author Mitzi Espinosa Luis has researched the Chinese Freemasons of Cuba (there were at least 4 chapters around the island) and has written a book about them.  One of her grandfathers was Chinese.

Continuing our search for things Chinese in Cuba, we stopped by a monument erected to honor Chinese residents who had joined the fight for Cuba’s independence from Spain in 1898.  It was a tall granite column with a plaque etched in Chinese and Spanish.  It read, “There was not one Chinese Cuban deserter, not one Chinese Cuban traitor.”

Since the withdrawal of Soviet assistance in the early 1990s, Cuba has come to rely more and more on Chinese aid and expertise.  The public transport buses all appear to be made in China, and the X-ray machine technicians we saw at the airport were all PRC nationals.

The author is a UC Berkeley graduate and retired 30-year federal employee.  Your comments are welcomed.  Please note that the above (except where noted) expresses the author’s personal views and should not be construed in any way as representing the views of any organization, project or foundation.

Pelosi Statement on 70th Anniversary of Repeal of Chinese Exclusion