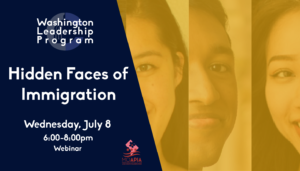 Moderator Shyam Gadwal introduces himself as a 2nd generation American and 1st generation college student. He grew up in the DMV area and considers himself as an educator. The speakers then introduce themselves. Lakshmi Sridaran is from Atlanta and started doing local organizing in New Orleans after Hurricane Katrina. This inspired her to work in racial justice initiatives, mostly in black led organizations. She is currently the director of SAALT (South Asian Americans Leading Together). Jacinta Ma is from California and is the current Vice President at the National Immigration Forum. Quyen Dinh is a 2nd generation American of Vietnamese refugees. Dinh mentions that immigration issues and immigration rights are very personal to her. Glenn Magpantay, Esq. is the director of the National Queer Asian Pacific Islander Alliance (NQAPIA) and currently works with around 60 Asian American LGBTQ organizations around the nation. He works at the intersection of immigration rights, racial justice and queerness, and visibility.

Moderator Gadwal asked the speakers to elaborate on immigration policies and issues they are currently advocating for. Ma wants to change the discourse on immigration and promote constructive dialogue. Sridaran focuses more on the intersectionality between immigration and racial justice issues. She is currently working with DACA recipients, refugees, and asylum seekers in detention in the US. Magpantay works closely with LGBTQ immigrants of all immigration statuses. If the Trump administration cancels DACA and deports all DACA recipients, they can face prison or death sentences in their origin country. Dinh works on issues of belonging, particularly for people who arrive as refugees but have deportation orders based on past minor misdemeanors. Her organization also works on dismantling the narrative of the bad vs good immigrant.

Next, they talk about how they advocate for immigration issues especially when speaking with folks uneducated on the topic. Ma stresses how it is important to try to reach people where they are coming from. A lot of advocacy is providing education, so knowing who the messengers and receivers are is crucial. Dinh reflects on racism and anti-blackness within our own families. She says that it is important to build on existing long-term relationships and to take the time to have these conversations with family members as well as conservative public officials.

COVID-19 has severely impacted the world, however, many people forget that detention centers and prisons are highly vulnerable to this pandemic. The speakers touch on how we can advocate for the safety of people in these pandemic hotspots. Sridaran says that there are current “release them all” campaigns, but there are many  limitations: many immigrants are agreeing to deport themselves since they have been in the detention centers for a long time. Unfortunately, their origin countries are not allowing their entry due to COVID. Additionally, the Trump administration is trying to take advantage of COVID to speed up the deportation cases.

The next questions center more on Asian Americans and/or 2nd generation immigrants and the rising xenophobia and racism due to COVID-19. Sridaran has been tracking racism against Muslim, Skih, and Arab American communities since 9/11. She has definitely seen a rise in racism this year due to COVID. There is also a lack of acknowledgement from our government about this. She notes that state and federal agencies are not required to report any form of hate crimes. The Jabara-Heyer NO HATE Act was introduced in Congress to combat the lack of requirement of hate crime reporting. Ma mentions examples of racial stereotypes: immigrants are threats and criminals, Chinese Americans are spies, Muslims are terrorists, etc. It is difficult for people to separate their internalized and learned racism and think rationally or see immigrants as people. Dinh mentions how many Asian Americans are either seen as the perpetual foreigner or seen as just white. These are the two mainstream narratives towards Asian Americans.

There was a question posed on how to advocate for frontline workers or immigrants that are not in the US with the H1-B visa. Magpantay mentions that many H1-B holders are young and/or LGBTQ people. Professional and undocumented workers are both “screwed” in the US visa process. He believes in dismantling the rich vs poor immigrant stereotype. Ma says there is an ‘unskilled immigrants’ myth; it is almost impossible to immigrate to the U.S. and be “unskilled”. Family-based immigration is the only way to immigrate to the US without required proof of education or skills. People are not recognizing that the US runs on many different kinds of immigrants, from seasonal farm workers to tech workers in Silicon Valley. The agricultural industry has the highest number of undocumented workers, however, these workers are often forgotten when talking about the U.S. immigration reform.

1882 At: From Vincent Chin to George Floyd