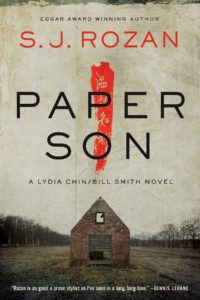 When I became aware of this novel, it became a “must-read” for me.  It certainly met my first prerequisite for my reading tastes, i.e. it was an Asian American story.  But I learned that the story is set in the Mississippi Delta region – the place where I was born and raised, the place that impacted my life so profoundly, the place for which I will always have strong and mixed feelings – and I knew I had to see what the book had to say!

Author S. J. Rozan’s novel is a murder/mystery book.  It centers on Lydia Chin, a private investigator from New York Chinatown, who goes to Clarksdale, Mississippi, to help a cousin who has been charged with the murder of his father in their family grocery store.  She was not even aware that she had relations there until her mother asked her to help free this cousin.  Lydia’s journey becomes a deep personal discovery of family for her and other characters.  I am not an avid reader of murder/mystery books, so I won’t critique the storyline in too much detail.  The story had many twists and turns, along with surprises and sub-plots similar to other good books of this genre.  It was definitely a page turner that kept me interested and wanting to arrive at a resolution.  So, that was satisfying to me.  But what I always look for in my readings of Asian American literature is the authenticity of the Asian American, in this case, the Chinese American, aspect and backdrop of the characters and environment in the story.  This is my bottom line in my role as a self designated reviewer of Asian American literature.

The story inPaper Sondealt expertly into the minds and psyche of Chinese Americans along with the culture that influences those qualities.  This came from a lot of emphasis on the family connections.  Even though this was a murder case that is certainly not uncommon in all of our societies, we are always aware that this one is different because it involves Chinese Americans who may have unique views that others are unaware of. The most profound part of the novel to me was the depiction of the attitudes and interactions of the Chinese Americans with their fellow citizens of other ethnicities, i.e. the Caucasians and the African Americans, especially in Mississippi, which has a reputation of conflict and strife among the diverse ethnicities.  The novel was very straightforward in showing all sides of these attitudes.  I was particularly impressed with this treatment of the subject of race.

The novel deftly wove into the story an authentic history of the Chinese in Mississippi that gave us more of an understanding of their presence in this state – how and when they came to settle there, the establishment of grocery stores owned and operated by Chinese throughout the vast Delta region, the continued immigration from China, including the use of “paper sons” to facilitate immigration, the interactions and relationships with non-Chinese.  It also made us aware of the lifestyles of the families who lived in this culture of small grocery stores in rural towns and the inclination of many in this community to be involved with gambling addictions.  These insights were important to the storyline and plot.  From my experience of growing up there and from my more recent revisits, this was all totally authentic and historically correct. The descriptions of the cities and places were all good, pretty much as I knew them to be.  The characterizations of the Mississippi Chinese felt authentic and as I remember many when I lived there.  The Chinese American world there is complicated.  As the main character Lydia Chin kept remarking throughout, the Mississippi she experienced was not what she expected.

My personal scorecard for Paper Son by S. J. Rozan gives it an “A.”  I recommend it mostly for its realistic depiction of a little known and little understood community of Chinese Americans and also for being a genuinely good story.