The Chinese American Museum in Washington, D.C. and Washington Performing Arts held a conversation with Christopher Tin, a Grammy Award-winning composer of orchestral and choral music, on August 19th. The event promoted his new album, “To Shiver the Sky,” released on August 21st, which set a record as the highest-funded classical music Kickstarter campaign ever.

“To Shiver the Sky” combines numerous languages to chart the history of flight exploration. The title was inspired by a line in Rudyard Kipling’s poem, “The Conundrum of the Workshops”: “They builded a tower to shiver the sky and wrench the stars apart.” Mr. Tin incorporated stories, philosophies, and people associated with flight into the music, such as Icarus’ Greek mythological tale, Copernicus’ Heliocentric Theory, and President John F. Kennedy’s moon landing speech. He also drew constellations with the score’s notes and pointed out illustrations of Pegasus, Phoenix, and others overlaid onto them. “Various instruments play certain notes on certain beats,” he explained, “… [And] all of these constellations share something in common. They’re all related to flight.”

Later, Mr. Tin discussed his work on the soundtrack of Crazy Rich Asians, a blockbuster film released in 2018 that features a majority Asian cast. “It is very hard to get your foot in the door of a major film studio… [My wife and I] put together a pitch packet… [of] six oranges, a show reel, and some booklets about my history, music, and influences [for the producers and director],” he laughed. “We went into a lot of detail making it look really glitzy as per the book… Crazy Rich Asians is all about opulence, so we wanted to present a physical product that looked opulent.” The pitch packet also included his original compositions recorded by a band and an orchestra and animated into a video sequence. In the end, his efforts were successful, and his arrangement of “Waiting for Your Return” was used in the movie’s opening scene. A full version of the song can be found here. 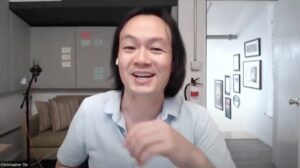 Mr. Tin’s accomplished career composing music for concert halls and film indicates his artistry’s vast appeal. “I am very much about writing music that is enjoyable to as wide a swathe as possible while having the integrity of compositional craftsmanship,” he explained. “I hope my music can be a gateway from one world to another. A crossover between… different worlds.” Whether he’s composing for the classical world, Hollywood, or video games, Mr. Tin’s songs certainly serve to create a more unified and diverse community.

Although the interview was originally scheduled to be in-person with a concert performance, it was postponed due to the pandemic. Despite the delay, the online format allowed a broader audience to attend, making for a unique event centered on Mr. Tin’s work.

More information about “To Shiver the Sky” can be found here: https://christophertin.com/albums/toshiverthesky.html

1882 At: A Candid Conversation about Racial Bias, hosted by Larissa Lam and Baldwin Chiu

1882 At: Asian American Call With the Movement for Black Lives