Writing like an Asian:  Thoughts on writing, composition, and issues of identity 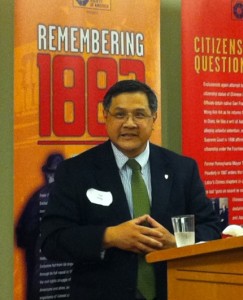 (Q1) How did you become involved with the 1882 Foundation and the Talk Story Events?

The 1882 Foundation is a continuation of the 1882 Project. The Project was a collaboration of organizations and individuals who believed it was time for Congress to apologize for the Chinese Exclusion Laws. These laws were first enacted in 1882. They were not repealed until 1943 and then it was for political military reasons. There was never any acknowledgement (let alone apology) of the tremendous harm these laws caused by them essentially legitimizing anti-Chinese racism. Starting in about 2007, several of us decided to raise public awareness of these laws, including a need for Congress to address them through Congressional action. Eventually, we formed the 1882 Project with Representative Judy Chu and a steering committee to guide the effort. The Steering Committee consisted of the Chinese American Citizens Alliance, Committee of 100, Japanese American Citizens League, National Council of Chinese Americans, and OCA. The DC law firm Covington and Burling provided pro bono support. Through a national grass roots effort, we got the Senate and the House to condemn the laws unanimously and reaffirm commitments to protect the civil rights of all people in the United States. This was in October 2011 and June 2012. As a next step, we are working on the President to issue a statement of apology. But, once the Congressional resolutions passed, we have been shifting focus from political advocacy to developing capabilities that will better fulfill the educational mission that had always been a part of the 1882 Project. That really is our goal — to broaden awareness of the laws and their history and consequences and to deepen our understanding of their continuing significance today. The 1882 Foundation emerged from there.

Talk Story Events also came from the 1882 Project. It was seen as one way of several approaches to involve our community in our advocacy efforts while collecting the oral histories we knew would remain part of our educational efforts to come. In fact, however, Talk Story has a longer, meaningful background than the 1882 Project. If you are Hawaiian or were involved in Asian American Studies and literature in the 60’s, you’ll recognize the term refers to both an oral history tradition and concepts of how a community defines itself. I very much believe in them — to ensure we control our own identity, we must tell our own stories our own way. Talk Story Events in DC invite guest speakers, but the core of what we want to do is to create a setting and routine where people like you and me can come together to share our stories, however small. In the sharing of the stories, our community is strengthened.

(Q2) The most recent Talk Story Event was in October and discussed the topic “From Congress to Classroom: Teaching about Chinese Exclusion Laws.” How was the response to this event?
Attendance was okay. Got good feed-back and people were engaged. The next weekend we took the presentation to a conference of social studies educators at Roanoke. And, we are now planning workshops for DC metro area for May, provided we get financial or other support. Our goal is to develop lesson plans that teachers can use to supplement their classes. Our focus is on 6 to 12 grades. We know teachers’ plates are full as they cover core topics and meet standards of learning. They will be challenged to add another topic to their already crowded school year. So, one approach is to develop lesson plans that address state-required standards of learning — such as those related to civics and government — but using examples and case studies from the history of the Chinese Exclusion Laws or even the legislative process of the 1882 Project accomplishment.

(Q3) In reaching out to educate a new generation of students about the Chinese Exclusion Laws, what have you found to be the most challenging or rewarding?
Challenges and rewards are related. It’s actually quite dismaying to realize how little the public knows about the Chinese Exclusion Laws, even among educators and our own community. But that has been rewarding too in the sense that it’s such a revelation to people when they hear about the history of the laws and the human stories linked to them that they become energized to learn more. I think our challenge is to build up the 1882 Foundation so that it can capture that enthusiasm institutionally and sustain the interest, link resources to both the casual and professional researcher, promote collaborations that develop material and exhibits that support our mission. Everything we do now is on a volunteer and in-kind basis. That’s a reward to see people so willing to give time for what they believe is important work. But, the time is approaching when we will need a permanent staff and organization if our programs are to grow.

(Q4) In what ways have the DC metro area schools been cooperative in incorporating the Chinese Exclusion Laws into their core curriculum?

That’s what we will see in our May workshop proposals. We are just beginning.

(Q5) What direction would you like to see the 1882 Foundation and/or the Talk Story Events take in the coming months and years?

For the Talk Story Events, we would like to record them and to expand along the lines of an oral history process similar to NPR Story Corps. We need equipment and, more importantly, a committed team to record the events. We think we have a formula to uncover stories. We now need a way to record them and store them. But, we will then quickly need storytellers who can re-tell or craft the stories in a compelling way for people who are accustomed increasingly today to YouTube and video. We need a permanent space for the 1882 Foundation. Right now, we meet in coffee shops and borrowed office spaces. A permanent space would enhance our capabilities considerably. To get space, we need more and regular income or a gigantic endowment (so let me know if you know anyone with deep pockets!). Ultimately, we would like to see the establishment of a National Chinatown Talk Story Center. We envision the Center becoming a Chinese American Museum of sorts –not artifact-based like those on the National Mall but– in DC Chinatown electronically connected to API museums and historical societies throughout the U.S., and where the 1882 Foundation can act as the hub for a national network of collaborating partners committed to preserving and interpreting the history of the Chinese in America.

Join the Talk Story Events list and be notified of monthly events, go to: http://bit.ly/TalkStoryList

Talk Story: From Congress to Classroom