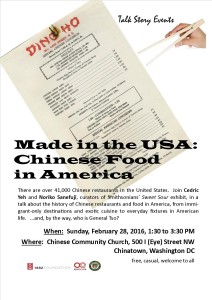 Made in the USA: Chinese Food in America

Cedric Yeh and Noriko Sanefuji, curators of Smithsonian’s’ Sweet Sour Exhibit, explore the history of Chinese Food in America. They point out that there are over 41,000 Chinese restaurants in the United States.  Understanding how Chinese food developed from an immigrant-only taste to become as ubiquitous as the fast food hamburger and hard shell taco tells much about the history of migrant communities and the American society that took them in at times and discriminated against them at others. In the end, Chinese food in America and immigrants establishing their place in the United States are American stories, as unique to this country as are chop-suey and fortune cookies.

Talk Story Events are free and open all.

A Review by By Roberta L. Chew

To introduce the topic, the program opened with a 2 minute trailer of the documentary film, “The Search for General Tso,” which chronicled the filmmaker’s quest into the origins of the ubiquitous Chinese chicken dish –  from America to Hunan Province, China, to Taipei, Taiwan and back to New York City.  The film also more broadly explores the development of Chinese food in America. (See the review of this 72 minute film which appears elsewhere on this website.)

Cedric Yeh, a U.S. military historian with the Smithsonian Museum of American History, grew up spending most of his youth in his parents’ Northern Chinese restaurant  [do you know where?  In California?].  One favorite toy was the deep fryer in the restaurant’s kitchen.  His parents had come to the U.S. in 1965 when the immigration quotas were lifted with changes in U.S. law which allowed thousands more Asians to emigrate.   Cedric’s personal history led him to delve into the story of Chinese food in America, how it reflected assimilation and cultural exchange, but also exposed rampant discrimination and rejection.  Or, put another way – the food was accepted, the people were not.

He recalled how Nixon’s historic visit to China in 1972 spurred American interest in more exotic varieties of Chinese food – from Szechuan, Hunan, Beijing  – besides the omnipresent Cantonese food and restaurants.  Cedric said that chop suey – an amalgam of celery, carrots, bean sprouts and chicken – was brought to the U.S. by the first Chinese envoy.  (This was news:  common lore has it that chop suey was invented by Chinese miners who threw together whatever ingredients they had on hand for a passable stir-fry dish.) Cedric&Noriko

Cedric offered a brief historical survey – from the arrival of the first Southern Chinese immigrants to California during the 1850’s Gold Rush years, to the passage of the first Chinese Exclusion Act in 1882, to the eventual repeal of the exclusion laws in 1943 and finally, to the Congressional “expression of regret” in 2012 (short of an apology with no reparations included) for the history of discrimination against the Chinese in America.

Cedric and his museum colleague, Noriko Sanefuji, had pursued a five-year project on food in America.  One outcome of their efforts was a modest exhibit about Chinese food in America, titled Sweet Sour, which was displayed in a ten-foot long glass cabinet on the ground floor of the Smithsonian Museum of American History for a limited period of time three years ago.  The exhibit contained authentic items such as a fortune cookie press and an original tin for tea cakes.  Fortune cookies were invented in Japan and not San Francisco as many people think.  They derived from Japanese tea cakes.