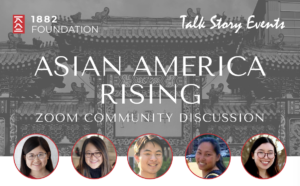 On Sunday, July 12th, a group of 1882 Summer Interns led a discussion on current issues within the Asian and Pacific Islander American community. The speakers gave a general overview of various political, cultural, and social challenges that Asian Americans currently face — with the caveat that they are first, not representative of Asian America and second, not experts on any given issue. Interns Lauren Eng, Saniya Han, Susan Li, Hayle Wesolowski, and Kyle Wang (read more about them at Our Team) discussed five main topics: identity and intersectionality, solidarity with the Black community, affirmative action in higher education, diversity and discrimination in the workplace, and boba liberalism and commodity culture. Their aim was to provide some background on these topics as well as share their own opinions and experiences.

As a companion to their presentation and discussion, the interns compiled a list of resources and readings separated by topic, listed here:

Start of each topic in the video:

Additionally, many great comments were made in the chat box throughout the discussion. To learn more about the audience’s insights, refer to the anonymous quotes below:

In response to how the presentation addresses the “rising” of Asian Americans:

Talk Story Reflection: Stanton Jue and his stories of War and Diplomacy