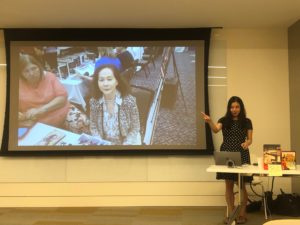 Talk Story featured a presentation and discussion of portions of the Rodgers and Hammerstein musical movie from 1961, Flower Drum Song, at the regular monthly event on September 15, 2019.  The program was moderated by former OCA-DC board member Jenny Cho, author of Chinese in Hollywood, and she included a brief history of Chinese and Asians involvement in movies, dating back to the silent film era.  She told about the classic 1916 film, The Curse of Quon Gwon, Anna Mae Wong, and other historical facts. But this event focused on the first musical with all (almost) Asian cast, that made huge headlines when it premiered.

The main story of Flower Drum Songis one that is certainly familiar to most of the Chinese and Asian American community.  That is about a contractually arranged marriage between families.  But this one becomes complicated with other storylines that show conflicts between the cultures of being Chinese and being Chinese American, again, an area that many in our community have dealt with. 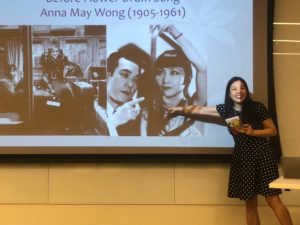 There was active interaction with the Talk Story audience throughout the program, as Jenny used clips of the movie to lead discussions on certain nuances that the movie depicted, both subtly and blatantly.  These included stereotyping Chinese behaviors, generation gap issues, Chinese food, filial piety, arranged marriages, undocumented immigration, among several others.  Negative stereotyping is always a concern of our community.  Many agreed that the depictions may have been a bit extreme, but not overly so as to be demeaning.  Most could identify with the portrayals as being pretty familiar and authentic.  Some did not like how some of the women characters were shown in a way that fed the stereotypical “dragon lady” and sexy, manipulative roles for Asian actresses. Generally, the audience seemed to concur that the movie was enjoyable and did not give an offensive portrayal of the Chinese community. 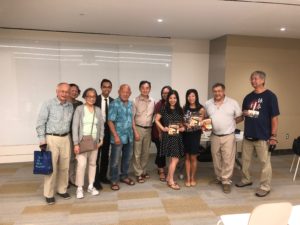 We commend Jenny Cho for leading such a provocative discussion and Adrienne Poon for setting up this event.  It was timely because of the interest of recently released Asian American films, Crazy, Rich Asiansand The Farewell.   It was a nostalgic trip back for those who had seen the original release of Flower Drum Song, and stirred conversation about other eventful Asian themed movies, such as Joy Luck Cluband The World of Suzy Wong.  This was another Talk Story event that shows that our community has many rich stories that define who we are, and that by sharing them, we continue to strengthen our community.

Chinese American Authors: What They Write About and Why

Talk Story — Made in the USA : Chinese Food in America