The Search for General Tso:  A Documentary Film about Chinese Food in America 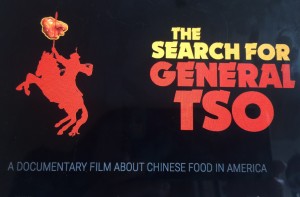 (The film trailer was shown in a program about Chinese Food at a Talk Story Event, Washington, D.C., February 28, 2016.)

Director Ian Cheney and a friend were traversing rural America and noticed Chinese American restaurants were just about everywhere, even in out of the way small towns.  They were intrigued by one particular dish, General Tso’s Chicken, which was ubiquitous.  They decided they would explore how Chinese food got to be so widespread and popular and build the story around this one dish.

Cheney began a collaboration with Jennifer 8. Lee, author of The Fortune Cookie Chronicles who co-produced the film.  Lee herself had been on a personal journey to discover the history and development of Chinese food in America, learning how it began with Chinese immigrants who came to America in the Gold Rush days to today’s 40,000 Chinese restaurants which stretch from coast to coast.  How did a foreign cuisine come to appeal to the American palate?  The film explores the slow acceptance of immigrants, the flexibility and adaptability of Chinese chefs and business owners willing to do what is necessary to succeed and satisfy the customer.

The filmmakers start their quest in China where they discover the dish is unknown.  They visit Hunan Province, home of the real life General Tso.  There they meet a 5th generation descendant of the general, who show them around his memorial, describing his life and fame during the Qing Dynasty.  Not surprisingly, the relative knows of no connection between General Tso and a chicken dish.

The film is entertainingly interspersed with animated woodcuts.  It explores contending claims by a Taiwan chef and a New York City Chinese chef as to which of them invented the dish.  We’re taken on a tour of discovery of Chinese restaurants from New York, San Francisco, Phoenix, Flagstaff, New Mexico, Missouri, New Orleans, and Syracuse.  Along the way, we learn of the history of Chinese in America, how they became dispersed across the country due to discrimination in California, how they were aided by benevolent and family associations who assigned specific territories for new restaurants so they wouldn’t compete directly with one another.

Authors such as Bonnie Tsui who wrote American Chinatown:  A People’s History of Five Neighborhoods (2010) and Andrew Coe, author of Chop Suey:  A Cultural History of Chinese Food in the United States, (2009) also chime in.  Legendary Chinese food maven, Cecilia Chiang, who helmed the pioneering Mandarin Restaurant in San Francisco in the 1960s discussed the challenges she faced opening an upscale Chinese restaurant.  Sitting by her is her son, Peter Chiang, founder of the modern chain of  P.J. Chang’s restaurants.  All in all, an engrossing, all-encompassing tour and history of Chinese food in America.

DC Chinatown Community Activism in the 1970s: a Photo Retrospective