On February 21, 2017, Georgetown University’s Political Awareness Committee (PAC) of the Asian American Student Association (AASA) screened the 1882 Foundation documentary, “April 1968: Through Chinatown’s Eyes,” to an audience of 80 Georgetown undergraduates from all cultural, racial and ethnical backgrounds.

After the screening, the students engaged in an informative and captivating conversation with guest panelists. Ted Gong, the director of the 1882 Foundation, briefly introduced the documentary series project and described how the Asian American community had its own historical arc running parallel to the broader Civil Rights Movement, with landmarks such as the Immigration and Neutrality Act of 1965. Other panelists included Lisa Mao, the producer of the documentary, Harry Chou and Stan Lou, who were interviewed in the documentary, and Easten Law, a Georgetown Chaplain-in-Residence who moderated the discussion.

After each panelist shared her or his own connection to the documentary and the events of April 1968 in D.C.’s Chinatown, they took questions from the audience. A sophomore asked how solidarity could be fostered in the absence of geographical vicinity. A freshman questioned whether the panelists personally knew members of Asian American community in D.C. who participated in the movement to support the African American minority in 1968.

The event lasted for an hour and a half, and many students stayed afterwards to have longer conversations. This event presented Georgetown students with a nuanced angle of the Civil Rights Movement, telling one story of the influence this historical movement had on another minority group who was also marginalized at the time. In the end, many students expressed interest in attending more events on this perspective in the future. 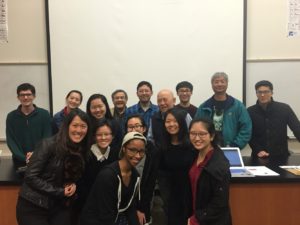 House GOP: We Remember the Repeal of the Chinese Exclusion Laws