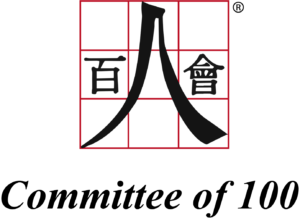 On July 7th, the Committee of 100 hosted a panel discussion on challenges Asian Americans face in the workforce, specifically from a millennial generation perspective. The panelists included Julie Sohn, MBA student at the University of Michigan, Matthew Choi, Vice President at Granite Point Mortgage Trust, and John Lian, Research Fellow at Harvard University. The panel was moderated by Peter Young, C100 Member and CEO of Young & Partners.

The moderator, Peter Young, then shared the results of the poll through data and graphs. While the majority of respondents thought the career ceiling for Asian Americans as a group was very serious (7 or 8 on the 1-10 scale), they did not think it was quite as serious for them personally in their individual career paths (4-8 on the 1-10 scale). Perhaps surprisingly, men and women reported the same general level of perceived seriousness, whereas we might expect women to indicate higher levels on the 1-10 scale than men would (although this may depend on the industry). The poll results also showed that older respondents found the career ceiling to be more serious than younger respondents did, which indicates how challenges with career growth become amplified at higher levels of seniority. In other words, older respondents felt like they were already approaching the career ceiling.

Julie Sohn spoke to this last data assessment, saying that her Asian American identity did not necessarily affect her recruitment or being hired, but that it did come into play with promotions or performing “successfully.” She said she had been passed over, assumed to be quiet, or had her English language skills questioned. Matthew Choi agreed that once already in a job, Asian Americans are perceived as naturally smart or hard-working so there is a lower margin of error and they are scrutinized more. Reiterating Sohn’s point, he spoke about needing to be more assertive when giving pitches, being concise and articulate, and speaking up sometimes just to be heard. Both Sohn and Choi suggested building 1-on-1 relationships so that colleagues get to know you as an individual, and identifying Asian American mentors even outside your organization. Sohn added that East Asians should not forget that mentors can also include South Asian Americans, who generally see more representation in C-level positions than do East Asians. The panelists then acknowledged that this webinar was heavily centered on the East Asian perspective.

John Lian then talked about his experience in the world of academia and while the academic world is hard for all groups, Asians are often well-represented. However, he discussed that Asians tend to work hard but aren’t thought to necessarily have original ideas, and therefore are not recognized for being original thinkers which makes it difficult to rise in academia. He suggested that being able to ask for help and being a team player may help combat this stereotype.

In terms of generational differences, Lian mentioned that his dad’s understanding of success would be the quality of his work, whereas Lian also sees success as being social, networking, and fitting in. He and Choi also discussed how Asian American culture tends to value education and “being the best” (as opposed to “doing your best”), but that dynamism is also equally important. Young, the moderator, added that he would like to see kids able to follow their passions, as opposed to being given only “honorable” career choices like doctor of lawyer.

At one point, they also spoke about the surprise white people have upon learning Asians even face problems in the workplace. While this is an example of the model minority myth, there is some truth with the economic mobility and prestigious education of some Asian Americans, which was particularly represented well on this panel. The panelists came from and were speaking about rather elite and exclusive industries, such as investment banking on Wall Street or medical research at Harvard University. The moderator, Young, spoke about “rebelling” by going to Yale instead of MIT like his parents had wanted him to. This shows we should remember that this panel does not and cannot represent all Asian Americans.

In the chat, I asked the question: “Do you see it as a part of your role to be involved in increasing access and inclusion not only for Asian Americans but for other groups of color, especially in your more “elite” (and I’m assuming whiter) industries?” Unfortunately, this question was not answered, but I would have been curious to hear about how the panelists viewed the accessibility of their own professions.