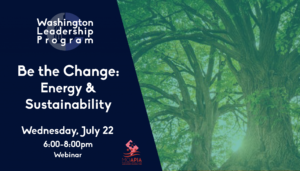 Dung Tran, CAPAL’s Programs and Operations Associate, began the discussion with an audience poll on individual actions that promote environmental health. Afterwards, she shared her personal experiences with environmental injustice in Versailles, a low-income, majority Vietnamese community in New Orleans, Louisiana. After Hurricane Katrina in 2005, the mayor announced emergency plans to open a debris landfill less than two miles away from Versailles. Versailles fought back and eventually stopped the construction, but they now face a new injustice: New Orleans’ leaders recently decided to build a natural gas power plant close to its residents without their consent. Soon, they will experience the environmental consequences, particularly increased air and water pollution. “Instances like this are not uncommon within the AANHPI community,” said Ms. Tran.

Susan Jin Davis, the Chief Sustainability Officer of Comcast NBCU, expressed sympathy for Versailles and described the ways in which consumers can hold institutions accountable. “Innovation and sustainability are hand in hand,” she explained. “Businesses should have an incentive to do the right thing.” She strongly emphasized Comcast NBCU’s sustainability initiatives and urged the audience to buy from businesses that reflect their values. As a vegan, Ms. Jin Davis fashions company initiatives around food as well. Her daughter introduced her to the plant-based diet, demonstrating the effect that family can have on sustainable behaviors. Similarly, Ruchira Shah, the Director of Product at Geli, a startup that develops software controls for energy storage, challenged the audience to limit meat consumption, especially beef. “[But although these] individual actions are important and matter, they’re not enough… Individual action has bigger influence when it’s a body of movement, like the Sunrise Movement,” she said, focusing attention on Destiney Mack, a climate organizer with the youth-led political organization that fights climate change.

Ms. Mack spoke about the roles that people of color have in environmental justice movements. “Our voices matter the most because we are disproportionately affected,” she declared. “If our voices aren’t listened to, how do people who are not us know what’s important to us?” She encouraged the audience to vote, contact local lawmakers, and become involved with community organizations. Nina Lobo, a Mid-Atlantic Policy Associate at the Coalition for Community Solar Access, which provides solar programs to American households and businesses, agreed, stating, “Any little action you take can have a huge ripple effect… You have power, even as an individual.” She recommended reading What Do You Do With an Idea?, a children’s book that illustrates the far-reaching influence that a single action can have. Individual actions can propel communities towards even greater change.

This unique event highlighted an issue not commonly associated with the AANHPI community. Voices surrounding the environmental justice movement tend to be from rural white and urban Black and brown communities, but it’s clear that it relates to Asian Americans as well. We must come together to address these challenges and transition to a more sustainable future.