The first of a new series called “SOLIDARITY CONVOS” aired last week in a collaboration between Act To Change, an anti-bullying organization geared towards APIA youth, and NextShark, an Asian and Asian American news outlet. “SOLIDARITY CONVOS” are virtual conversations designed to promote unity among racial minorities. They have a similar setup to Act to Change’s existing series, “COVID-19 CONVOS,” which addresses the increase of racist incidents during the COVID-19 pandemic. Moderated by Maulik Pancholy, the co-founder of Act to Change, this first installment featured Kwame Alexander, a New York Times bestselling author and contributor to NPR’s Morning Edition; Bo Thao-Urabe, the Executive & Network Director of the Coalition of Asian American Leaders; and Aerica Shimizu Banks, the founder of D.C.’s Pinterest office and a leader of women of color entrepreneurs.

Mr. Pancholy opened by asking, “How was your day?”, and Mr. Alexander’s simple answer, “I am making vegetable lasagna,” elicited smiles among the panelists. But he explained that it was a metaphor: “We are in the midst of a major shift in our world, while at the same time, we must remember to love the people in our lives. We must also live our lives with everything that’s going on… How am I right now? In this moment, I’m great. I’m making lasagna. [But] I’m also pained by what’s happening to Black men, to Black women, to Black people… and the attempted destruction of our humanity.” Mr. Alexander’s response set the foundations of a reflective discussion. 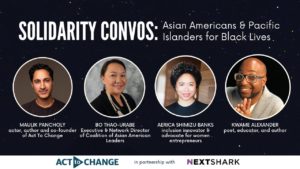 Next, Ms. Thao-Urabe explained the tenuousness of the APIA model minority stereotype and its connection to the death of George Floyd, an unarmed Black man killed by police three weeks ago. She specifically mentioned Tou Thao, an Asian American police officer who was involved. “One of the officers on the scene was Hmong American, Asian American, someone who looks like us. And for so many, it was not only the killing of a Black man, but that a person who looks like us played a part in it,” said Ms. Thao-Urabe. She argued against those in the APIA community who support him, saying, “We either choose to be in solidarity [with the Black community], or we are complacent in hoping that our affinity to whiteness rewards our quietness.” Floyd’s death epitomizes the historical divides among these racial groups.

In a key section of the panel, Ms. Banks remembered a dangerous encounter between her brother and the police. Years ago, officers approached him at night as he sat on the side of a road while intoxicated. Citing his “menacing” look, the police pulled their guns, brutalized, and arrested him. Afterwards, Ms. Banks’ mother, an outspoken Japanese woman, couldn’t understand how this had happened. “When she’s mad at the police, she’ll get up in their face and say, ‘Why are you doing this?’” said Ms. Banks with a sad smile. Her mother has the “privilege to escape from these interactions unharmed and listened to.” As a light-skinned biracial woman, Ms. Banks has a similar privilege. But this is a privilege that her brother with darker skin doesn’t share. Society tends to perceive people of darker skin with higher suspicion, which so often manifests consequences that demonstrate the dangers of a stereotype.

Mr. Alexander echoed Ms. Banks’ words about the dangers of a stereotype. As an author, he explained, “Books are windows… We need to give people of all races books about every race because they’re a glimpse into those lives they’re unfamiliar with.” He writes books that humanize people of diverse races, classes, and abilities because “the world of possibilities begins in the kinds of literature that [we] read.” Ms. Banks agreed with him, citing research that children become set in their ways at an early age. “It’s our responsibility to have these difficult conversations about race earlier,” she said.

In closing, Mr. Pancholy asked the audience to consider donating to advocacy organizations listed on the “Act To Change For Black Lives Resources” webpage, linked below. This webpage also contains several resources and a recording of the panel discussion. He ended the event with two carefully chosen quotes: (1) “We urgently need to bring to our communities the limitless capacity to love, serve, and create for and with each other.” – Grace Lee Boggs, an Asian American human rights activist; and (2) “Justice is what love looks like in public.” – Cornel West, a Black American philosopher and political activist.