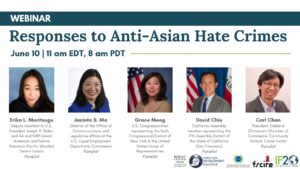 Audrey Kitagawa started the event by providing a brief historical and contemporary context for the anti-Asian hate we see today. She emphasized that although anti-Asian hate crimes are not a new phenomenon in the United States, such incidents have been growing at an alarming rate. Then, each panelist introduced themselves and discussed their work in response to the increasing anti-Asian hate.

Erika L. Moritsugu discussed her experience with the Biden administration. She praised the administration’s actions supporting the AAPI community by advocating for racial advancement and signing the COVID-19 Hate Crimes Act. Jacinta Ma then told the violence and discrimination Asian Americans experienced throughout history. Grace Meng, the first and only Asian American member of Congress representing New York, emphasized the importance of new measures to increase hate crime reporting. Assemblymember David Chiu said that even though the state legislature now has a record number of Asian members,  prejudice against the AAPI community is on the rise. Carl Chan, a hate crime victim himself, discussed the importance of increasing awareness of anti-Asian hate in response to hesitance among Asians to report for fear of shame or retaliation.

Kitagawa then directed specific questions to each speaker about their work and understanding of increased anti-Asian hate. Assemblymember Chiu’s proposals include language-accessible legal services, healthcare and mental health services, compensation for hate crime victims, a hate crime hotline, monetary aid for ethnic towns, better safety in schools along with restorative justice programs, and stronger data collection and outreach strategies. Congresswoman Meng discussed her efforts to promote a museum dedicated to Asian and Pacific American history as well as her continued collaboration with colleagues in the Congressional Black Caucus, the Congressional Hispanic Caucus, and Native American colleagues to push for more comprehensive education that teaches children “the good and the bad, the achievements and the trauma” from America’s history. Moritsugu emphasized the role of the government as a “first mover” in recognizing the signs of systemic racism; for example, President Biden clearly named “system racism” in his Address to a Joint Session of Congress this past April. Ma called on private sector employers to have solid policies against discrimination and harassment in place, clearly communicate them from the top leadership to employees, and put them into practice within a workplace culture of openness. Chan discussed having an Asian liaison police officer that speaks the community’s language , patrolling volunteers, and providing  resources like air horns and whistles to Chinatowns across the country so local communities can protect themselves and other marginalized groups.

The panel discussion had three main points. The first is intersectionality. Meng and Chan highlighted that women make up a majority of those reporting hate crimes, such as the Atlanta shooting where six Asian women were killed. Moritsugu also underscored the religious diversity in the Asian community: when President Biden signed the COVID-19 Hate Crimes Act, several Congress members were present behind him, not only representing different regions in Asia but also different faith traditions.

Second is the lack of AAPI history in K-12 education. As Congresswoman Meng stated, a lack of education on these lived experiences forces Asian Americans into the perpetual foreigner narrative, all of which are exacerbated by the increased racist rhetoric. Thoughts become words, and words become actions that harm people and the communities around them. Part of fixing today’s wrongs is learning from the wrongs committed in the past.

Third is speaking out against injustice, not just for the AAPI community but all marginalized communities. Chan expressed his wish for hate crime victims to be game changers by using their voices at rallies and voting. Chiu emphasized that leaders across states need to have coordinated  action for effective change to occur nationally. Kitagawa closed by encouraging each attendee to reflect on themselves, finding ways to change and grow so we can work with others to bring justice and freedom to a world where everyone is “free of fear, [discrimination], exclusion, and marginalization.”

The recording of this webinar may be accessed on Youtube under the International Academy for Multilateral Cooperation as well as on the Georgetown Berkley Center for Religion, Peace and World Affairs website under the Events page.