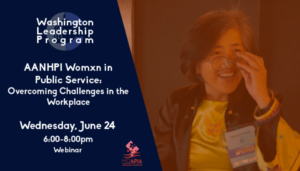 The Conference on Asian Pacific American Leadership (CAPAL) hosted an online panel discussion, “AANHPI Womxn in Public Service: Overcoming Challenges in the Workplace,” for its 2020 Washington Leadership Program. Each summer, this organization holds a series of bi-weekly sessions to provide resources and inspire civic engagement among youth. This year’s theme, “Moving Forward,” brings awareness to current events in the United States and their relation to Asian American, Native Hawaiian, and Pacific Islander (AANHPI) experiences. In this session, speakers provided guidance to AANHPI womxn interested in public service.

Sue Ann Hong, the President and CEO of the Center for Asian and Pacific American Women (CAPAW), opened with five trivia questions about the Census and current demographic trends. The answers shed light on both the United States’ rapidly growing AANHPI population and the treatment of working men and women. Afterwards, the panelists discussed the importance of representation in positions of leadership. “Sometimes we feel invisible. We’re one of few. When we get more representation… the diversity of thought increases,” said Sue Ann Hong, citing data about the benefits of diversity in the workplace. Sandy Hoa Dang echoed her thoughts. Building on her childhood as a refugee, she founded AALEAD, a DC nonprofit for Asian American immigrant youth development. Later, President Obama appointed her to represent the United States as leader of the Vietnam Education Foundation. Sue Ann Hong leads by example in this executive position. She acknowledged, “If I can do it, other people [think they] can do it too.” Mr. Ben de Guzman cited Senator Tammy Duckworth as another example of this statement. Senator Duckworth is the first Thai-American woman to be elected to Congress and one of the only female immigrants in the Senate. Her background as a U.S. Army lieutenant colonel adds legitimacy to her public policy work and demonstrates the success that others of similar backgrounds can achieve. Leaders such as Senator Duckworth encourage youth to “break that cultural barrier to succeed,” said Sue Ann Hong.

The panelists then spoke about the challenges AANHPI women face in the workplace and its relation with the #MeToo movement. For example, Sheri Daniels spoke about how Hawaiian women are often stereotyped as the exoticized and hypersexualized Hula dancer. However, she acknowledged that, while harassment, microaggressions, and discrimination still exist, #MeToo has empowered more women to speak their truth. Sue Ann Hong agreed and discussed how women often experience  courage and shame when speaking out against perpetrators, but #MeToo has helped create a support network to process these feelings. She also alluded briefly to the “keep your head down mentality” that both women and Asian Americans are often taught, thus reminding the audience that the intersections of race and gender are inextricably linked.

The panelists also spoke about  the “glass ceiling” (or specifically “bamboo ceiling” for Asian Americans), a metaphor for an unspoken, invisible wall preventing women and underrepresented groups from advancing further in their careers. The panelists discussed how women, especially in managerial positions, must constantly prove themselves to avoid being questioned or belittled. Additionally, there is the pay gap. Moderator Samantha Chiu shared that AANHPI women make $0.90 for every $1.00 that white non-Hispanic men make, and that there is even further discrepancy within the AANHPI community (ex. $0.52 per $1.00 for Burmese women).* Sandy Hoa Dang thus urged employers to post their salary ranges on all job descriptions and to pay their interns. She also encouraged jobseekers to do market research, learn the art of negotiation, and understand their worth, skills which she had to learn herself.

Sue Ann Hong also talked about how finding mentors helps with career growth and can sometimes break the glass ceiling. She advised the audience to reflect on their goals and skill set before seeking out a mentor who can help with personal and professional development. Sheri Daniels also added that mentors can come at any point in your career. She advised those in leadership to seek out mentors, including those younger than them, which helps with learning constantly and not becoming complacent. Ben de Guzman and Sandy Hoa Dang both emphasized that mentorship (and more broadly, networking) is about relationship-building and finding people with similar interests.

The last session of the event was an open Q&A session. The first question asked was: How do you navigate public service when you’re swayed by lobbyists and legacy money? Ben de Guzman referenced the TV show “West Wing”; no one is who they really are in politics. He also mentioned how you decide if you are in it for the money or if you are in it for public service. Sheri Daniels touched on how she knows that she can walk away from negative lobbyist influence. She mentioned how women are often taught to go with the flow, and she said that women must speak out when they feel uncomfortable with lobbyism.

The second question was: How have you bridged the gap and/or navigated the transition from traditional to Western work culture? Sandy Hoa Dang says she first learned Vietnamese work culture. However, she’s been in the US for 40 years and she’s found out that Vietnamese work culture has changed. Sandy recommended apologizing for not initially knowing certain customs of work culture, not making assumptions, and remembering that there is always a learning process with everything. Sue Ann Hong had to learn and understand the unwritten rules, regardless of whether coworkers told her the rules. When she used to work at State Farm Insurance, she was one of the only Asian American women so she had to learn really quickly how the department worked. She did that by assimilating pretty heavily in the beginning; however, she realized that she had to gain strength from her heritage as well. Sue Ann mentioned that she was at her best when she brought in Korean values to her work.

Moderator Samantha Chiu ended the Q&A session by giving the floor to the panelists to share closing remarks about their experiences working in public service. Ben de Guzman mentioned how our ancestors are watching us and how many of us feel like we have a  debt to our family and community. For him, public service has always been about the community he serves. He enjoys meeting the people he serves locally, and he sees public service as an opportunity and obligation to serve something larger than yourself. Sandy Hoa Dang stressed how she has benefited tremendously from public service. She has made lifelong friendships and connections as well as also being able to uplift and benefit the community. She said, “you should do public service if it’s one’s call to action.” She would do it all over again if she could. Sue Ann Hong stated that she came into public service 2 years ago and has learned a lot from people in her network. She enjoys helping and seeing women in public service succeed. Every day at work, Sue Ann’s personal goal is to help three people a day. Lastly, Sheri said that her role in life and public service is to “bridge, uplift, and give voice to people.” She said that when it gets hard and when she wants to give up, she pauses and reassess other ways to approach the project or issue. She told audience members to always remember that there are a lot of people that want to help and support you. Sheri quoted Michelle Obama, in that “people who are truly strong, lift others up, people who are truly powerful, bring others together.”

In the event’s closing remarks, Liz Jung, CAPAL Board of Directors and analyst at the Corporation for National and Community Service (CNCS), thanks the panelists and mentions CAPAL events and social media.

*Note: Source from the National Partnership for Women and Families. It is important to recognize that, according to this study, Black, Latinx, Native American, and white women are paid at lower rates and the wage gap is even more significant. More information on the wage gap among AAPI women can be found here.