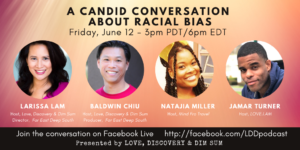 As widespread conversations about race continue to sweep the nation in the wake of police brutality and global protests, Chinese American filmmakers Larissa Lam and Baldwin Chiu hosted “A Candid Conversation about Racial Bias” on their Love, Discovery and Dim Sum podcast Facebook page. They invited their friends and fellow storytellers, Natajia Miller and Jamar Turner, on the show to discuss topics like bias and allyship. As the four speakers all have a personal relationship, the tone of the “candid conversation” was generally light and familiar.

Larissa opened the episode with a short interactive exercise about racial bias, asking the audience to guess and answer questions like: Which of the four speakers…

-is a rapper? (assumed: Jamar; answer: Baldwin a.k.a. “Only Won”)
-was not born in the US and lived in China? (assumed Larissa or Baldwin; answer: Natajia, who was born in the Bahamas)
-was a communications major (assumed: Larissa or Natajia; answer: Jamar)

The exercise helped reveal that, generally-speaking, we all are conditioned by society to associate certain traits with groups of people. The hosts emphasized that these unconscious associations do not make us “bad racist people,” if we don’t let them compound into negative beliefs or dangerous actions.

Jamar spoke first, sharing his thoughts on the recent murder of George Floyd. He believed that this was a situation where the officers involved did not have compassion for human life. Jamar also has first-hand experience with being profiled and discussed how he changes some of his behavior when interacting with police “just to get home alive.” Larissa tried to help Asian American audience members empathize with a similar feeling through the example of her and Baldwin of not speaking Chinese in public, amidst recent hate crimes during COVID-19.

Natajia also shared a story of her experience with racial profiling and corrupt law enforcement. Officers had originally pulled her over, then without explanation arrested her and her mom for suspected possession of marijuana, which they did not have. The police then issued her a $1,000 “super speeder” ticket (when she had consciously been driving under the speed limit), and told her she could not dispute it in court because she was an immigrant. After paying in cash to be released, Natajia called the police office to dispute the ticket but they claimed it didn’t even exist. While this incident occurred in the early 2010s, prior to many videos documenting similar situations, she recalls fearing for her life and knew what officers were capable of doing. Today, in 2020, she expressed outrage over George Floyd’s death, especially because there was video footage and still a debate of whether officers should be charged.

Larissa then asked about how to move forward to become aware of our biases and be an active ally to the Black community. Jamar said he believes education and rhetoric starts at home and how we are raised. Therefore, having these open conversations with our own communities will complement the work being done at the higher level (news, social media advocacy, corporations taking a stance, etc.) and give momentum to this current shift in social consciousness. Natajia agreed and also recommended experiencing different cultures as a way to combat stereotyping the unknown/the “Other.” She then suggested to those genuinely committed to allyship to start with a three-tiered approach:

1) Do internal checks on your own biases and educate yourself.
2) Communicate with your family and close circle and speak up if someone says something problematic.
3) Go out into the community and use a broader platform to advocate and spread the word.

You can follow and support the work of Natajia, Jamar, and Larissa and Baldwin using these links. You can also learn about Larissa and Baldwin’s most recent award-winning film, Far East Deep South, on the history of Chinese in Mississippi, here.