Wing on Wo & Co., a porcelain antiques shop located in New York City’s Chinatown and home to the W.O.W. Project, a community-based initiative focused on preserving Chinatown’s creative culture and history, hosted a workshop and fundraiser on June 25th called “Confronting Anti-Blackness as Asian Americans.” This event, held exactly a month after Minneapolis police murdered an unarmed Black man named George Floyd, was intended to help Asian Americans address anti-Blackness within themselves and their communities. Participants wrote reflections about anti-Blackness, shared their experiences in small groups, and learned how herbalism can promote community healing.

During the workshop, Huiying B. Dandelion, a creative writer and cultural organizer, guided us through writing prompts about our racial coming of age stories and experiences with anti-Blackness. While reading responses in the chat, I was surprised that so many others feel uncomfortable discussing race issues with their communities too. It’s difficult to acknowledge implicit biases and hold the people around you accountable when you can just avoid tough conversations altogether. Staying silent is a much easier option, but there’s a certain shame that comes with silence. Person 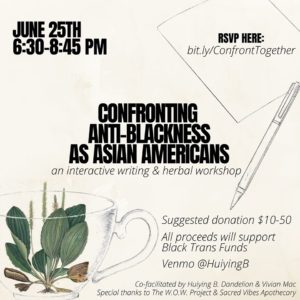 ally, I attended schools in a predominantly white community throughout my childhood. I became accustomed to seeing white individuals in positions of power, and as I grew up, I put aside societal divisions that I saw. I only started to question them recently after learning about the Movement for Black Lives. Some participants began supporting this movement after the fatal shooting of Trayvon Martin, an unarmed Black boy. Others were moved by the pain felt by Black and brown friends and the protests that developed in their hometowns.

In a particularly impactful segment, participants anonymously gave voice to stereotypes they grew up hearing about the Black community. These stereotypes, typed onto a slide of virtual sticky notes, indicate the extent to which negative biases pervade our society. Grouping every toxic message in one place and hearing them read aloud was sobering. In small groups, we discussed how these stereotypes influence public policy such as employment discrimination, police bias, gerrymandering, the War on Drugs, the prison industrial complex, and Black mortality in healthcare. These racist policies result from prejudices we learn in our communities and reflect back into it in a vicious cycle. For our communities to change, we must unlearn our biases and “not only point our fingers outwards but also work within ourselves,” said Huiying.

After providing an update on the fundraiser’s progress, Vivian Mac, a spiritual herbalist and founder of Willow’s Touch, a shop for plant-based remedies, led an herbology workshop. She focused on three plants: dandelion, burdock, and plantain, which are found in Asian herbal medicine and cuisine. Each plant is considered a weed, and similarly to weeds, anti-Blackness spawns easily and is difficult to eradicate. The hardiness of these plants is symbolic as well. They grow through concrete and in environments unwelcome to them; plantain, whose growth accelerates after it’s stepped on, particularly thrives in damage. One by one, Vivian described each plant’s health and healing properties. I was interested to learn that dandelion, an unwanted flower that grows in front of my house each summer, regulates blood flow and can be made into tea. “Uproot what is deeply seeded in yourself, and… release patterns that you have been socialized into,” said Vivian.

By the end of the event, Wing on Wo & Co. had reached its fundraising goal of $3000 in donations to support Black Trans funds, including The Okra Project, G.L.I.T.S., For the Gworls, and the Emergency Release Fund. The total later rose to $3,798. Huiying and Vivian also sent a list of helpful resources, linked here.

This interactive writing and herbal workshop was a unique way to reflect on internal biases that many Asian Americans share. Moving forward, we must confront anti-Blackness in our community. Long-held prejudices will continue to have damaging consequences if we don’t address them at their roots.