“Be Water,” a documentary that chronicles the personal and professional life of Bruce Lee, premiered on Sunday, June 7th. ESPN aired it for “30 for 30,” its 30th anniversary celebration highlighting notable sports happenings covered by the network. The documentary’s symbolic title takes its name from a line of Lee’s poetry: “Empty your mind, be formless, shapeless – like water… Be water, my friend.” Water’s fluid state enables it to penetrate barriers and take many shapes. Emulating water, Lee navigated a path into the film industry, where he established himself as a young Chinese American actor. 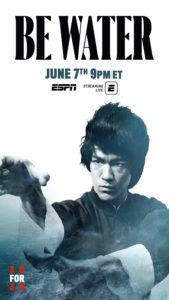 Lee was born in San Francisco, raised in Hong Kong, and returned to the United States in 1959 when he was 18 years old. During Lee’s career in the United States, it was exceedingly difficult to land major roles as an Asian actor. Of those available, most were given to white actors. The documentary featured a montage of heavily-criticized films to demonstrate Hollywood’s racism and limited depiction of Asian people as caricatures. “Bruce came to understand how he was seen by white Americans through these stereotypes,” said Jeff Chang, a culture critic and writer. Lee faced discrimination in both the United States and Hong Kong as person of mixed race, but he was determined not to take these demeaning roles.

In 1966, he originated the role of Kato in “The Green Hornet,” a television show about crime-fighting superheroes. Although he earned five times less than the show’s star, demonstrating a pay-equity disparity that non-white actors still endure today, his character enhanced the public’s perception of Asians. Lee was dismayed when the show ended after one season. Following the cancellation, he had difficulty finding similar work. “It would have been very easy for him to get stuck in a hamster wheel if he was going to do it the way Hollywood wanted him to do it,” said Shannon Lee, his daughter. Lee even pitched a show about a Shaolin monk to TV executives, but they chose a white actor to play the lead instead, naming it Kung Fu. In his journal, he wrote, “The truth is, I am a yellow-faced Chinese. I cannot possibly become an idol for Caucasians. Because of this, I decided to come back and film for the Chinese industry.” Hollywood’s lack of strong Asian characters forced him to leave the United States in 1971 to search for those roles elsewhere.

Back in Hong Kong, Lee starred in a series of movies that paved his international success and improved how Americans viewed Asians. Wars with Japan and Vietnam exacerbated anti-Asian sentiments, and the American public had a question: “Is China the good guy or the bad guy?” said Andre Morgan, a television producer who worked with Lee. Lee’s films swayed their opinion and introduced kung fu to the world stage. “His goal in life was to show the beauty of Chinese culture to the world,” said Linda Caldwell, Lee’s widow. His final film, “Enter the Dragon,” achieved success as his only Hollywood movie.

“Be Water” also illustrates Lee’s ties to movements in the United States and abroad. “His very presence on the screen [was] a protest itself. As people of color… to see people on screen who look like you is galvanizing,” said Jeff Chang. In addition, Lee barred racial divisions from permeating his martial arts studio. He maintained inclusiveness amidst America’s “shameful hierarchy of race,” said Kareem Abdul-Jabul, a friend of Lee’s, and his open studio was a direct contrast with segregation instituted in many public places at the time. Even today, Lee’s “Be Water” philosophy is an inspiration to global movements. As a nationalist, he wanted Hong Kong to be free and independent of British colonial rule.  Similar sentiments exist among Hong Kong citizens opposed to the Chinese Communist Party. Lee’s connection to these movements demonstrates his legacy as “a mid-Pacific man, someone who lives between both worlds,” said Jeff Chang.

“Be Water” is a celebration of Lee’s accomplishments. By drawing connections to the global events of his time and revealing lesser-known parts of his life, this documentary provides an illuminating perspective of his life as an actor and influence on the representation of Asians in the media.