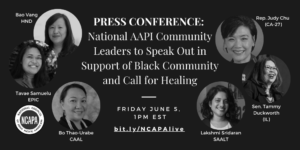 In light of recent events surrounding police brutality, #BlackLivesMatter, and racial justice in America, the National Council of Asian Pacific Americans (NCAPA) and Asian Pacific American Institute for Congressional Studies (APAICS) hosted a press conference on June 5th. Asian American leaders in  government positions and local community organizations  across the country spoke out to express solidarity with the Black community. Since the death of George Floyd, over 200 Asian American Desi Pacific Islander organizations have issued statements demanding justice, calling to dismantle anti-Blackness, and committing their allyship.

To complement some of their stances (referenced below), here are some starting reflection points for non-Black members of the Asian American community:

By learning about our collective past, we ask the critical question of “How did we get to where we are, and why?” Lakshmi Sridaran, Executive Director of South Asian Americans Leading Together, argues Asian Americans would not necessarily have the rights and freedoms of today without the struggle and civil rights activism of Black Americans. This includes influencing the laws and systems that have since allowed for newer generations of Asian immigrants to move to the US and pursue the American Dream. As to why we are not taught this, Sridaran stated that “our history has purposely been fragmented from us as communities as color, but it is on us as Asian Americans to put the pieces back together.”

Tavae Samuelu, Executive Director of Empowering Pacific Islander Communities, also called on reflection through the example of Samoa’s past and its colonization. She advocated for divesting from law enforcement and moving towards community policing, and reminded her audience that there was once a world without police in pre-colonial history. Samuelu also recalled her personal understanding of liberation and freedom, as it relates to her own community, as being first inspired by Black activists and authors.

We must also examine what Bo Thao-Urabe, Executive Director of the Coalition of Asian American Leaders, called “layered oppression,” by understanding that just because Asian Americans have experienced racism does not mean it is equal to the severe structural racism Black Americans have faced since this country’s foundation. It is important to distinguish between interpersonal racism (acts of prejudice that occur between individuals) and structural or systemic racism (a series of institutions that perpetuate inequality based on race). While individuals of all backgrounds carry bias and prejudice, we must center the conversation on the systemic violence, where compounded racism against Black Americans exists in multiple facets such as housing, education, policing, employment, etc.

Senator Tammy Duckworth (D-IL) said that while Asian Americans do understand decades of discrimination (including most recently with coronavirus-related hate crimes), she also called out her own privilege, acknowledging that she does not have to teach her own children to beware of the police, whereas this is a reality for Black parents and families. Police brutality is just one example of racial injustice highlighted by the Black Lives Matter movement.

3) Understanding “Not My Oppression, But Still My Fight”

Thao-Urabe added that how “[picking] between Black lives and Asian lives is a prime example of how white supremacy works.” It’s not that Asian lives don’t matter or that all Asian Americans are anti-Black; it’s bringing attention to the system we live in, which has dehumanized and continues to dehumanize Black lives.

Gregg Orton, President of NCAPA, echoed this thought and called on Asian Americans to recognize that “joining this fight does not be forsaking our own. White supremacy is the common denominator of all communities of color.” Only through working together to combat the system that disenfranchises those most oppressed will we all be liberated.

Suggested resources for further learning include:

In addition to engaging in these thought spaces, you can donate, support Black-owned businesses, read books centered on race and/or history, vote, talk to your family and friends, etc. Check out some of these resources for examples of concrete actions to take and stand in solidarity with Black Americans.