The 1882 Foundation’s Chinese American Short Film Seminar (May 13th-May 14th) explored filmmaking as both identity building and as potent storytelling. Films presented at the Alexandria Black History Museum grappled with the role of lineage and faith, and added to the defining “Chinese American.”

These included a full length screening of “Finding Samuel Lowe,” in which three African Jamaican-American siblings from Harlem searched for information regarding their grandfather, Samuel Lowe. Their search took them from New York and Toronto to Jamaica and China. Film writer Paula Madison explored intersectionalities between international communities and race through familial ties.

A short film, “Finding Cleveland” by Baldwin Chiu and wife Larissa Lam, discovered roots in the Mississippi Delta, where Chinese live between black and white struggles. Their short film touched upon the community impacts of racist legislation like the 1882 Exclusion and the Page Acts, which split families and left gaping holes felt acutely by children and grandchildren decades later.

Paul Jew’s “The Wok From Albuquerque to San Francisco” focused on a single act of kindness in Albuquerque and its ripple effect across time and space to his Auntie Tane’s Wok Shop in San Francisco Chinatown.  It touched on both Christian grace and Chinese ancestral rites. Ken Eng’s excerpt from “My Life in China” explored these rites in quiet poignancy with his father’s return to China.  Both films tell a spiritual aspect of Chinese diaspora that binds them despite separations by geography and generations. 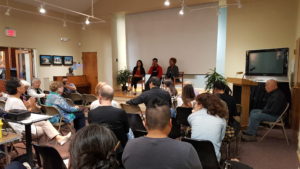