In November, Ting-Yi Oei presented at the Virginia Council for the Social Studies Conference in Richmond in November for the 4th consecutive year. The theme of the Conference was “Uncovering the Past to Empower the Future.” The workshop the 1882 Foundation presented fit perfectly into that theme illustrating how landmark Supreme Court cases involving Asian Americans (notably Wong Kim Ark v. the U.S., Gong Lum v. Rice, and Bhagat Singh Thind v. the U.S.) have shaped our understanding about citizenship, equal opportunity, and equal treatment under the law. These are issues that are as timely and important today as ever.

The American Historical Association’s Annual Meeting on Jan. 6th in Washington, DC presented another opportunity to screen “Through Chinatown’s Eyes, April 1968.” After the screening, Lisa Mao and Penny Lee, producers of the film, sat on a panel with Samir Meghelli of the Smithsonian Anancostia Community Museum, and Ted Gong, Director of the 1882 Foundation to discuss the film and answer questions. One of the key issues that arose from the discussion was the importance of preserving the history and identity of communities like Chinatown and their legacy.

Later that afternoon as part of DC’s program to commemorate the 50th anniversary of events of DC in 1968, we took “Through Chinatown’s Eyes” to the National Building Museum for another screening and panel discussion with Harry Chow and Regina McPhie whose stories are featured in the film.

In the spring we have several events scheduled in conjunction with the grant from the Virginia Foundation for the Humanities. On March 20, 2018, the “Traveling Film Seminar” goes to Norfolk State University. Loudoun County Public Schools will host the International Youth Summit that brings 100 students from 25 countries to the U.S. and treats them to 11 days of experiencing student life and opportunities to visit the DC area. Paula Madison, of “Finding Samuel Lowe,” has been invited to be the keynote speaker for the Summit on April 10, 2018. Her film will also be part of the program at Norfolk State. 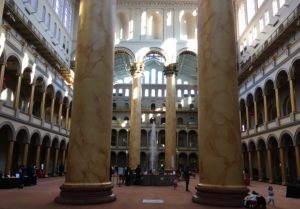