Beatley Library in Alexandria, Virginia hosted a discussion with Adrienne Berard, the author of ​Water Tossing Boulders​. This book explains how a family of Chinese immigrants fought to desegregate schools in the Jim Crow South. Racism deeply influenced Southern policy during the Jim Crow era, a time period that spanned from the end of the Civil War to the beginning of the 1950s civil rights movement. Many public places were segregated along a black/white binary, which Ms. Berard displayed in a photo slideshow at the beginning of her presentation. The slideshow also featured photos of the Lum family that filed the case, their lawyer, and the town where the events occurred. With these images, she described the factors that led to the lawsuit. 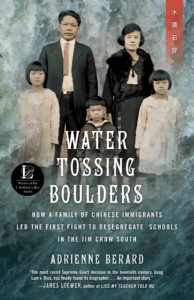 e, laws in the state of Mississippi followed a binary racial structure. Since the Lums were not white, they were considered colored and forced out of their all-white school. The Lums fought this decision in court on the basis of the Fourteenth Amendment’s Equal Protection Clause.

Ms. Berard emphasized that this was the first Supreme Court case to challenge the validity of segregation based on race in schools. She contrasted it with Brown v. Board, a similar and much more successful lawsuit that succeeded in banning this segregation almost thirty years later. Lum v. Rice’s failure in 1927 marks it “one of the most important overlooked cases in United States history,” said Ms. Berard. Its unanimous loss became the foundation of segregation for another generation.

As Ms. Berard and members of the audience recognized, this narrative of black and white races has lasted until today. Immigrant communities must continue to navigate this line. Ms. Berard also noted that direct descendants of the Lums attended the event, pointing to the significance of the case generations later.

When asked, Ms. Berard detailed the lives of the Lum family following the lawsuit. Since pursuing legal action had been a family decision, not a community decision, they lacked widespread support. On the advice of their lawyers, the Lums did not return to their original school. Instead, they moved to Michigan, and all three children notably graduated from high school, which was uncommon for immigrant families at this time. In addition, the Lum daughters later organized a remarkable wartime effort to aid the United States, which contributed to Chinese Americans being the largest minority population to serve during World War II.

We thank Ms. Berard for providing an illuminating glimpse into the struggle of the Lum family to fight for equal rights. Her presentation uncovered little-known public policy, and we look forward to her future work in Asian American history. The case of Lum v. Rice is a poignant marker on the path of racial minorities towards equality and inclusion.