Asian Americans Salute Frontline Heroes (AASFH) hosted a panel titled “From Vincent Chin to George Floyd” to discuss how these two murders created and sustained movements opposing racial injustice and discrimination. The panel was moderated by Gordon Quan, an attorney and member of AASFH. The panelists included: Helen Zia, journalist and activist for Asian American rights; Cherry Steinwender, Co-executive director and Co-founder of Center for the Healing of Racism; Mark Toubin, Southwest Director of the Anti-Defamation League (ADL); Annie Tan, an activist and cousin of Vincent Chin; Zach Owen, who helped a Burmese family that were victims of a hate crime in Midland, TX; and Reagan Hignojos, a friend of that same family. 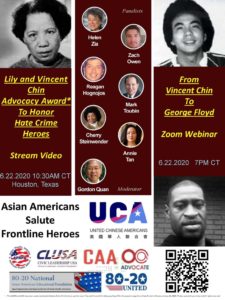 The discussion began with Reagan giving updates on how the Burmese family was holding up. Hignojos said the father is worried whether his son may face PTSD later in life. After the update, the panelists were asked how they think people can break stereotypes barriers between communities. Helen Zia began by summarizing the events of Vincent Chin’s murder and his murderers’ subsequent acquittal. Cherry Steinwender seamlessly incorporated this into her point that American institutions are not concerned with BIPOC interests when it comes to educating children. She also criticized the model minority myth and how it affects other communities of color. Steinwender emphasized that Asian Americans need to recognize the privilege they hold in this country and understand that supporting Black Lives Matter does not take away from Asian-Americans’ fight for equal rights. She ended by reminding the audience that America was set up to divide and conquer, as long as minorities keep fighting each other, no minority group will achieve equality.

Zach Owen spoke next, describing the hate crime that we helped prevent, explaining that he intervened because he didn’t want to see anyone get hurt. Next, Mark Toubin explained the work he was doing with ADL. He talked about how ADL recently created a working group to combat the hate and xenophobia exacerbated by the coronavirus and is pushing legislation that urges Congress to condemn police brutality, racial violence, and systematic injustice. Toubin also mentioned how Vincent Chin’s murderers couldn’t have been charged with hate crimes because Michigan, the state where Chin was murdered, didn’t have hate crime laws until 1989. Because of incidents like this, ADL is also working on ensuring states solidify and readdress their hate crime laws. Finally, Annie Tan spoke on systemic racism. She echoed Steinwender’s point on institutions separating minority communities, thereby creating the divide and conquer effect. Tan’s main point was that Asian Americans need to collaborate with other minority groups rather than fight them. We need to realize that we should be fighting for abundance and not scarcity, because if we always believe we need to fight for scraps, we will always be divided.

After the panelists, there was a Q&A session with the viewers. One viewer asked why Zia believes there is a potential second wave of violence towards Asian Americans arriving. Zia responded by announcing that the world is facing two pandemics: Covid-19 and racism. She asserted that the reason Asians are targeted is to hide the real causes that lead up to the pandemic. Zia said that this pandemic has shown who is really essential to keep this country running and how the most “essential” of us are also the most vulnerable. Zia concludes by warning the audience that Asian Americans have to be aware that this is only the beginning. As coronavirus cases increase, more people will get angry and lash out, especially in this country where our leaders aim to divide rather than unite.

As the event came to an end, each panelist gave one last recommendation on how the viewers can help combat racism.

At the very end, unexpectedly, Cecil Fong, a member of OCA-Greater Houston, was brought on to give some final words. Fong, for some reason, thought it would be best to conclude the talk by stating that while black Americans face racism, Asian Americans do too. He mentioned some examples of racism Asian Americans have faced. I was genuinely shocked and confused when Fong decided to derail a panel on solidarity between minority communities with such divisive comments. His comments were detrimental to an otherwise productive dialogue. At no time during the panel did anyone say that Asian American’s didn’t face racism, so to bring someone in who wasn’t even on the panel to make such tone-deaf comments seemed unnecessary and disappointing. As a whole, this was a spectacular panel and brought together many diverse voices that were advocating for solidarity between the Asian American and Black communities and educating viewers on meaningful topics. It’s quite a shame that it had to end on such an unfulfilling note, however, it was nice to see someone exemplify why we need solidarity.