Hotel on the Corner of Bitter and Sweet

When I first read Hotel on the Corner of Bitter and Sweet, written by Jamie Ford, I immediately placed in on my personal list of favorite novels.  It is a beautifully written story, and it can easily be categorized as a rather typical love story set in America, with the usual emotions from the characters.  However, the novel moves beyond that stereotype and relates a complex story that is an authentic story of Asian America, capturing the essences of the cultures of Asian heritage within the framework of the story.  This heritage can be unique, as other ethnic cultures in America can be, i.e., another part of the diverse fabric that makes this country what it is.

Jamie Ford’s novel focuses on the life of Henry Lee, a Chinese American, who lives in Seattle and had become a widower after the death of his wife Ethel six months earlier in 1986.  Henry learns the old, boarded up Panama Hotel is being renovated and that the new owner has discovered personal belongings that were stored there by Japanese American families when they were evicted from the community as the US entered World War II.  Henry is moved to recall when he was twelve years during those “war years.”  Those remembrances are the foundation of the story that moves back and forth between that time and his current life.

Henry intuitively knows that some of the belongings in that hotel belonged to a family with whom he became very close.  He became friendly with the Okabe family thorough their daughter Keiko.  She was the only other Asian person in his school.  As they began to rely upon each other for support, they developed a strong friendship and innocent love.  This definitely went against the prejudices of the Old World cultures of their respective families.  Although Keiko’s family accepted the friendship between the two young children, Henry’s father was totally opposed and fought against the friendship.  In fact, Henry’s father was fighting his own war with Japan and literally hated anything Japanese.

That time in the Seattle area was a conflicted and volatile time.  As the hysteria of WWII swept that region, it definitely affected the behaviors of many people.  Henry and Keiko realized that trying to maintain their relationship was difficult as society seemed to be conspiring against them.  There were strong anti-Japanese feelings all around, bullying from schoolmates, Henry’s father, and finally the US Government decree to evacuate Japanese Americans from the West Coast and to send them to remote internment camps in isolated regions of the country.  This was obviously difficult for the two to comprehend, and the situation shaped their individual lives and identities.

All of these factors conspired to separate them eventually, although both fought valiantly to maintain their relationship.  This haunted Henry throughout his life and he tries to come to grips with it when he has this opportunity to look through the belongings at the old Panama Hotel.  This bittersweet memory has had to stay in the background in the forty years since his separation from Keiko.  He had a full life with his wife Ethel and son Marty.  The one thread that was present to keep the memory alive was his continuing friendship with Sheldon, a street jazz musician who befriended Keiko and Henry when few others would and who shared his music with them. 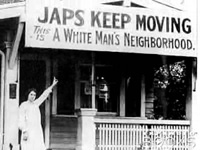 They both came to love that jazz music.  Now Henry had to cope with reconnecting with Marty while trying to find his lost voice and soul.  This becomes a very poignant episode in this story, as both father and son work together to enter the next phase of their lives.  Henry’s coming to realize that he had somehow subjugated his own identity for almost all of his adult life and acting on that realization was the most meaningful part of this whole novel for me.

I believe that the lack of awareness of one’s self identity can be a common situation in the Asian Pacific American (APA) community.  Jamie Ford highlights this in the characters of Henry and Marty.  This is what gives the novel its authenticity.  As a second generation Chinese American (someone born in America to immigrant parents), Henry was faced with conflicting values.  His traditional parents demanded that he adhere to their Old World cultures, and Henry truly values his parents and tries to do this.  Then he sees that they are totally intolerant of all Japanese, even Japanese Americans, insisting that he wear a button that proclaims “I am Chinese,” in

other words, “I’m not Japanese.”  He encounters prejudice against all Asians in his school and the community.  He sees the literal rounding up of Japanese Americans and their imprisonment behind barbed wire fences and under the guard of armed US military forces.  It’s no wonder that Henry’s self identity has been lost most of his life.

I feel that Jamie Ford told an authentic story of Asian America that deserves to be an integral part of American storytelling.  In particular, the APA community’s stories during the “war years” need to be known and appreciated.  What the community had to endure while trying to live as American citizens should not have happened.  The Author’s Note states that he wrote this story “without judging the good or bad intentions of those involved at the time.”  However, I think that it goes without saying that the imprisonment of Japanese Americans was an immoral act and totally wrong.  In our present age of security against terrorism, let’s hope that this kind of action does not reoccur.  I loved this book, and recommend its reading to all.

America is in the Heart