It was a busy fall season in the “curriculum corner.” The 2014-2015 school year began in mid-August with a workshop for social studies teachers in Fairfax County, Va., that aimed to recast how Asian American topics are included in high school courses. Ted Gong used stories, family photos, and documents from his own family to give a personal feel to the Chinese American experience. Gina Inocencio talked about the Smithsonian’s Young Historians Project that provides students with opportunities to interpret the Asian American experience using a variety of media techniques. Ting-Yi Oei rounded out the team presentation by illustrating how lessons involving Asian Americans (Wong Kim Ark, Mamie Tape, and Fred Korematsu) have played a key role in defining the 14th Amendment’s provisions for citizenship, equal protection under the law, and due process. Very strong emphasis has been placed on making use of primary sources so that students practice being historians themselves as they interpret and make sense of the documents.

At the Virginia Social Studies Conference in McLean, Va., and at the National Conference for the Social Studies in Boston, Mass., Ting-Yi took the 1882 Foundation’s message to many more teachers showing them ways to integrate Asian American content into the curriculum when they teach fundamental concepts about justice and the evolution of American democratic traditions. At the Boston conference, Ting-Yi and his wife Diane talked with over 80 teachers who had stopped by to learn how to broaden the curriculum to include more about Asian Americans and were given a packet of lesson plans and materials. Posters from the Smithsonian Asian Pacific American Center’s “I Want the Wide American Earth” traveling exhibition supplemented the lessons and provided further examples of the impact of Asian Americans on the life and culture of the United States.

Earlier in the year, Ting-Yi had the opportunity to give a workshop to teachers involved in the “Teaching American History” project in Loudoun County, Va. These are teachers who are committed to innovative teaching through the use of primary sources and whose impact is expected to go beyond their own classrooms into the practice of their fellow teachers.

To that end, we have engaged the State of Virginia in a discussion about their Social Studies Standards and Curriculum Framework which are under review this year for the first time since 2008. The 1882 Foundation submitted a document of proposed revisions to a working committee of teachers in June and followed that with separate meetings in September with both the Secretary of Education, Anne Holton, and the State Assistant Superintendent of Instruction, Billy Haun. In addition to “1882” representatives Ted Gong and Ting-Yi Oei, other Asian American stakeholders also participated in the discussions. The Standards and Curriculum review process will continue into 2015 and we intend to stay involved. Related to this broader view of Asian American history, we also encouraged the Library of Virginia to host the Smithsonian’s “I Want the Wide American Earth” Traveling Exhibition of 30 posters and banners. 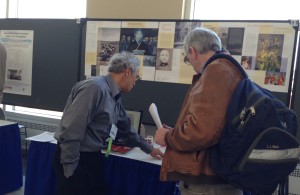 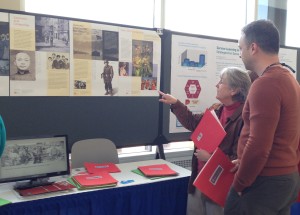 Ting-Yi Oei and Diane Curling at NCSS Conference in Boston