It was an exciting day for some 300 students, many of their parents, and 60 judges as they gathered at Mt. Vernon High School in Alexandria, Va. to participate in this year’s National History Day celebration for District 5 (Northern Virginia). For the first time, the 1882 Foundation sponsored an award of $250 for a student creating an entry on Asian American history around the theme of what it means to be an American. It was also a wonderful opportunity for Roberta Chew and Ting-Yi Oei of the Foundation to attend the event, talk with some of the students, and share in their accomplishments. Other sponsors included the Newseum, Mount Vernon, the Marine Corps Museum, the United States Institute of Peace, and the National Women’s History Museum. (For more information about the event and its sponsors, please visit this website: http://www.mountvernon.org/educational-resources/for-teachers/national-history-day/history-day-va5-competition/)

The recipient of the 1882 Foundation Award is Tsuyoshi Nemoto whose project was about the 442nd Japanese American Combat Battalion in World War II. Tsuyoshi is a 16 year old exchange student from Japan attending Mt. Vernon High School. He said he was inspired to create his exhibit because it was here in the United States that he first learned about the 2nd generation Japanese Americans (Nisei) who enlisted as soldiers and fought in Europe for a country that at the same time held their families in camps behind barbed wire fences. He was moved by their bravery, noting that 10,000 service medals were awarded to the 442nd , more than any other combat unit in the war. His research revealed interesting stories including information about the soldiers of the “Lost Battalion” from Texas who, surrounded by German troops in the French mountains, were rescued thanks to the efforts of the 442nd. Later, when Hawaii sought US statehood, the Texas Congressional delegation made a point of saying their yes vote was influenced by the 442nd‘s heroism. He also cited the 442nd’s post-war service, exemplified by former Senator Daniel Inouye of Hawaii. Tsuyoshi’s display included photos of Inouye as a young soldier and as a senator.

It was also encouraging to see a large number of Asian American students participating in the History Day competition. Many had taken on a variety of Asian subjects for their project, covering ancient to modern times: the Emperor Qin Shi Huang Di, Mao Tse-tung, Kim Il-sung, Mohandas Gandhi, Indira Gandhi, and the Khmer Rouge.

As we look towards the future, we plan to continue to sponsor National History Day and other programs that can put the focus on the role of Asian Americans in our history. We also urge our partner organizations to seek out opportunities to recognize the efforts of young people to learn more about the richness of the Asian American experience. 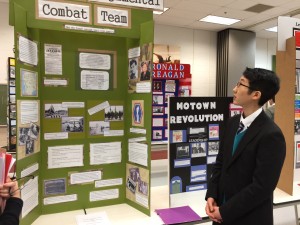 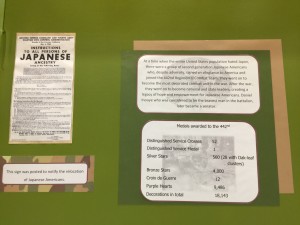 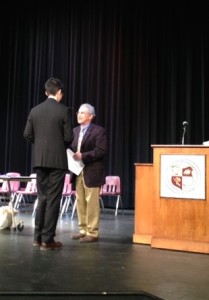 Receiving his award from Ting-Yi Oei

Chinese in the South and in the Confederacy